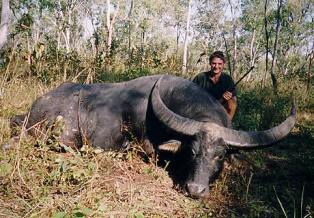 The most popular locations for Australian water buffalo hunting is the Northern Territory where you can find a large buffalo population that can be hunted with relative ease.

Australian water buffalo hunting trips offer some of the best safari experiences in the world. A most luxurious camp covers the wilderness as you enjoy the romantic landscape and stark beauty of the wild.

The far north region of Australia is home to the world’s most amazing buffalo population and the city of Darwin is the starting point and base camp for most hunting trips and safaris.

This region has the same weather conditions as southern African regions. It has dry summers and tropical winters, which are wet. Hunting is conducted in the dry season only.

Large tracts of land are navigated in a four-wheel drive which is comfortably air-conditioned, making it a very exciting and enjoyable experience. The vehicle moves out from the base camp every morning to navigate the region and hunt Australian water buffalo taking its occupants to the right locations in comfort.

The buffalo hunts are focused on wild animals, which are considered free-range game. The remote access areas of the northern tropics in Australia provide exclusive access to hunting grounds of 200,000 ha. This area is uninhabited and undisturbed by humans. The wilderness is full of Australian water buffalo populations and hunting success approaches one hundred percent for all safari goers.

Sambar Stag and Heers can also be hunted in this region and outings can be organized before or after the buffalo hunting safari. The free-range banteng hunts are also found in the far reaches of the northern Coburg Peninsula.  Safari goers can also enjoy barramundi fishing while hunting Buffalo.

The use of modern technology has made this safari an exciting adventure. The accommodation in camp is amazing. You can get two room canvas tents made out of canvas cabins with 24-hour electricity along with an ensuite bedroom and dressing room.

These spacious cabin tents are fully furnished. Along with a communal marquee which is the main area for all campers to join in. There is a facility of hot showers and completely modern toilets. For enjoying tea, beverages and coffee along with reading interesting material the communal marquee area is the perfect place to relax and interact with other campers and hunters.

Origin of the Australian Water Buffalo

Interestingly enough, the wild water buffalo populations in Australia were introduced in 1826. They are dangerous game to hunt and offer a lot of excitement, giving hunters the opportunity to bag trophy game.

Considered wild oxen, the Australian Water Buffalo is likened to the African Cape buffalo. The main reason for this similarity in classification is the fact that the position and built is similar to the African variety, which is known for the sweeping and impressively large horns on its head.

Other feral oxen that can be hunted are the pure Australian wild bulls. They are dangerous to hunt and have descended over a few hundred years from the stock that escaped from ranches in northern Australia. They are particularly dangerous to man because they have a hatred for man and are a completely aggressive breed of oxen.

With the best grade of free range hunting animals available in northern Australia and facilities offering a luxury service hunting camp, the entire safari and experience of hunting Australian wild buffalo is a truly remarkable experience.