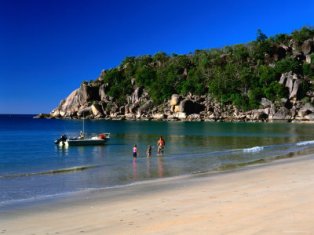 Are you visiting Australia and would like to know more about the magnetic island? Read our informative and factual guide…

The Australian army magnetic island is situated just off shore from Queensland in the Cleveland Bay. It encompasses an area of 52 square kilometers and has become a suburb of Townsville with over 2,000 permanent residents. You can reach the island from Townsville by ferry. The island boasts of a number of tourist sites such as World War II forts, a 27 square kilometer national park and bird sanctuary and walking tracks with stunning scenery.

Contrary to its role in some of the battles fought by Australia, today the island is a major tourist destination with several resorts and hotels to accommodate the growing demands of vacationers. There are several infrastructural and public facilities geared to meet the demands at all service levels.

The island derived its name from the apparent magnetic effect that was experienced by Captain Cook as he passed the area. Even though several expeditions have since been conducted to discover what may have caused the erratic behavior of Captain Cooks compass but nothing has been found.

Today, the island is more famous as a haven for indigenous flora and fauna with almost 54% of the island devoted to the purpose of conserving the local ecosystem in the form of the Magnetic Island National Park. The sanctuary is located on the hilly interiors and the northwestern side of the island that had rugged areas. One of the most popular inhabitants of the island is the bush stone curlew which is a bird that makes a piercing sound; Koalas are also found in the area and can be commonly seen on the Fort walks. Magnetic island is also known as an angler’s paradise; the waters around the island abound in Coral trout, giant trevally, mackerel, black and blue marlin, dogtooth tuna, sea perch, tuna, red emperor and the mahi mahi to name just a few.

Currently millions of dollars are being pumped into develop the coastal areas so that the ever increasing number of tourists can be accommodated; however, these moves have met with stiff opposition from the locals who fear the detrimental effects of such developmental efforts on the environment of the island.

In the Second World War, magnetic island was an important base for the Australian troops; the island housed military boats and supplies and ensured that the assembling fleets of the allied forces were protected. The forts, the name given to the remnants of the structure that once housed two to four guns for the protection of the island, is now a popular tourist hangout. The walk up to the area offers scenic views of the bay and the ocean. The command post which now offers one of the most stunning 360 degree views of the bay and the ocean, the observation post and the gun emplacements are all open for public viewing.