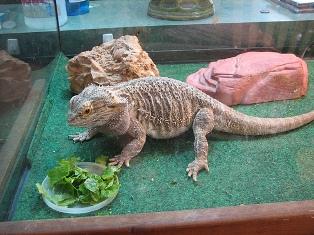 Interested in Australian bearded dragons? Read our guide for facts & information on this breed of lizard native to Australia…

These lizards are among the most common types of exotic pets found in Australia and are particularly popular among children because the lizards have a mild and gentle temperament and are very friendly. They can be kept without too much hassle because taking care of them is quite easy. The Australian bearded dragons bred in captivity have flattened bodies and broad triangular heads. A full grown adult Australian bearded dragon can grow to a size of 16 to 22 inches from head to tail and can weight from 350 to 600 grams.

A male Australian bearded dragon has a very distinct set of physical attributes that set it apart from the females of the species such as pre-anal pores that lie between the back legs and hemi-penal bulges. Females will usually have one vent and no bulge. And even though they do have pores theirs are less pronounced than those in the males of the species.

If you have a pet Australian bearded dragon, you have to remember to never turn it over because this depresses their respiratory system and may quickly result in death.

The stomach of this lizard is large enough to handle large quantities of food. You will notice that a young Australian bearded dragon does not eat as much vegetation as its older counterparts. As your pet grows you can gently persuade it to eat more greens and reduce the quantity of animal matter in its food and keep it at an 80% vegetation and 20% animal diet.