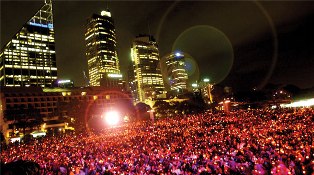 Looking for Australian Christmas carols? Want to know how the carols sung in Australia differ from those in the UK or USA? Read our guide for more facts & information…

Recently I was at a practice of the ever-popular Bush Music Club Concert Party and the place was abuzz with 8 of the 15 Wheeler & James Australian Christmas Carols. These famous carols were written about 10 years ago by two blokes from the New South Wales Dept of Education. Their primary goal when writing the lyrics to these Christmas carols was to give the Australian kids Christmas carols that related to the weather, traditions, customs and the world, they knew. So then it come as no surprise that nowhere in the carols can you find words like snow, ivy and mistletoe because Australia is as devoid of these festive symbols as Palestine!

The Christmas weather of Australia differs from the rest of the world besides even most scholars disagree with the appropriation of the Roman church that sets the winter solstice as the date for Christmas. It is ironic that most of the Australian outback bears a striking resemblance to the biblical Palestine and these are the features that are highlighted in the traditional Australian Christmas carols.

The styles used in the creation of these carols has been drawn from the English Carol tradition that survived the Puritan era; they have a traditional musical melody without the words and the trimming of the northern forests full of their snow cover.

Then again, there are always expat poms who are utterly mortified at the prospect of letting the Aussies change the traditional Christmas carols but then again isn’t it the truth that animism is what the British have grafted into the story of the holy night.
However, for those of us who are connoisseurs of the Australian Christmas carols, there are several CDs available in the market from the South Australian Symphony orchestra and numerous singers from Adelaide doing an impressive arrangement of the Wheeler and James set.

Then there are the Australian renditions of the traditional Christmas carols from Sally Sloane of Lithgow, NSW. The song is a classic version of Christ was born in Bethlehem and is strikingly close to the rural American rendition of the same carol. Most people agree that the traditional Australian Christmas carols are more suited to the warm Christmas weather of Australia after all it would be awfully hot to roast chestnuts on an open fire on a hot sunny Christmas day. Besides the Aussies have always done things differently, they do use the Christmas tree is a more pagan way than Christian and keeping with it, right after Christmas, the trees are burned in a big neighborhood bonfire.