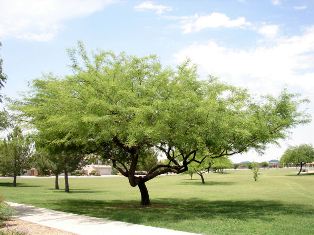 Known as Prosopis Chilensis in the world of botany, the Chilean Mesquite is a tree native to the subtropical and arid regions of South America. At an average the tree can grow up to thirty feet in height.

This unique tree displays beautiful greenish yellow flowers when it blossoms. The flower season for the Chilean mesquite is usually between spring to summer. The tree does best when it receives a full sun exposure and generally requires a low water density. The Chilean mesquite is renowned for its fast growth and has edible seedpods to offer.

The tree is found in both single trunk and multi-trunked varieties. Generally the trunks of the Chilean mesquite are dark in color and quite twisted in their shape. The bark has an overwhelmingly coarse texture. The mesquite is regarded to be an upright grower which develops a wide crown when it becomes mature. It is also characterized by a flat top.

Another appreciable quality of the Chilean mesquite is the fact that it is drought tolerant. Growing this tree with supplemental water is easy and it can very well reach a height of up to thirty feet even in such conditions.

The yellow green flowers on the tree are shaped like catkin. However you will find some of the trees to be sporting thorns whereas others don’t. The tree is also known to fairly resist shedding its leaves during the autumn winter season, especially when compared to the Argentine Mesquite. The edible seedpods automatically drop off during the summer season.

Anyone looking to grow the Chilean Mesquite needs to know how to provide it with the care and maintenance that it requires. First of all you should choose a good location for the tree as it requires full sun. The tree requires drip irrigation during the initial year after its plantation. Supplemental irrigation is not really required.

However the owner needs to be prepared to conduct some rigorous pruning to bring the tree into shape during its young days. You will find the tree to grow branches that cross each other which may result in wounds and scars. This is something that needs attention. Although some gardeners attempt to grow this tree in a symmetrical manner, it is next to impossible to be able to do that.

The fact that the tree does not shed many leaves makes it easy to look after during the winter seasons. However it tends to drop many seedpods during the summer seasons.  This may pose a problem in areas that receive heavy traffic. Other than that the tree is generally easy to take care of. It does not require any special kind of fertilizer to make it grow healthy as it is used to growing in arid regions. This is one of the reasons that cause people to choose the tree for their gardens.