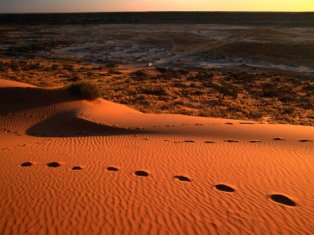 Want to know more about Australian deserts? Would you like to study the different landforms of Australia including its deserts? Then read our factual and informative guide …

The Great Victoria Desert: This area spans across Western and Southern Australia covering an area of 424,000 square kilometers.

Gibson Desert: The next in line is the Gibson Desert. This area is situated in central Western Australia and is covered in dry grass and sand hills. The desert covers an area of 60,000 square kilometers. Most of the inhabitants of this area are indigenous Australians.

Simpson Desert: Situated in the south eastern parts of Northern Australia; this desert spans right into Queensland in Southern Australia  with an area of almost 100,000 square kilometers; the desert is famed for the world’s longest parallel sand dunes.

The deserts of Australia are an integral part of the Australian Outback; the interiors of the continent are inhospitable and forbidding but with massive development across the country; these areas have not been left far behind either. Add to this the fact that there is a renewed interest in the deserts of Australia and wide scale tourism to these areas. People come in hordes to experience the rugged beauty of the continent from its rocks and gorges which are simply magnificent to the stunning arid scenery, the unique plants and animals that call these deserts their home and the vast expanse of colored sand.

Then there is the quietness, open space and serenity of the desert, a kind of solitude that lets you get away from the hustle and bustle of the city and it is not hard to imagine why people want to pay a visit to the Australian deserts.

There are other parts of the country which are more popular with the tourists for instance, its beaches, cities, national parks, coastal areas etc but the deserts of the country are truly unique and cannot be seen anywhere else in the world.

Only 3% of the Australian population resides in these arid areas; however, 70% of the country is classified as arid and semi arid which means that it receives less than 500 mm of rain annually. Like the other great deserts of the world; the Australian deserts too can be found around a certain latitude, in this case 30 degrees south. These statistics make Australia the driest place to live in besides Antarctica.