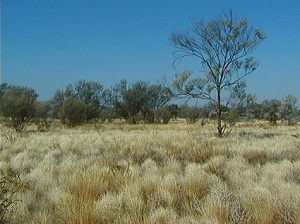 Would you like to know about the Australian grasslands? Then read our article for facts and information…

Grasses are plants that are common to every continent on the planet. They grow from the east to the west coast and from valleys to mountains. They are among the most successful among all plant species simply because of their adaptability and for the way in which they grow. Unlike other plants grasses grow from the base and not the tip of the plant. This means that these plants can grow under any circumstances and against all odds. For instance if a patch of grass is burned; this wont keep it from growing because even though the tips are burnt the plant will grow again from the base. It is no wonder than that thousands of foot steps on these grasses make no difference to their growth or survival capacity.

The leaves or glass blades are long and thin so very little moisture is lost and their deep thin roots are perfect for survival in dry soils. Unfortunately rapid industrialization and urbanization have proved detrimental to the native grasslands of Australia and most of them are disappearing at an alarming ace. When Captain Cook landed on the continent he was thrilled by the green luscious carpet of grass and wild flowers that covered the continent from coast to coast. However, European settlement changed much of this natural scenery and most native grasslands were turned into grazing pastures or changed for farming and other development or removed for settlement. Vast areas of grasslands were also cleared and were replaced by specific types of grass that the animals could graze on, still more grasslands were cleared for crops

Unfortunately, the habitat that once covered Australia from one end to the other has almost but disappeared with the Australian grasslands being deemed as the most threatened of all natural habitats in Australia with just less than 1% of the native grasslands remaining in the country.