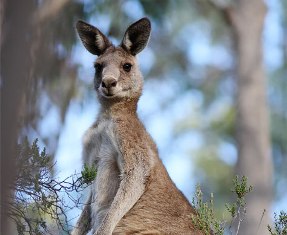 Have you always been fascinated by Australian mega fauna? Then read our article for facts and information…

Australian mega fauna refers to the number of large animal species found all across Australia. The Australian mega fauna does not include just mammals but also several reptiles and bird find themselves slotted in this category. To be categorized as mega fauna the animal should have a body mass estimate of at least 30 kgs or their body mass should be 30% greater than the other animals in a subspecies that is close to the species of the animal in question. Unfortunately, several mega fauna species became extinct almost 50,000 years ago.

Most studies hypothesize that the arrival of humans proved detrimental to the survival of these animals. Indiscriminate hunting and the use of fire may have very well have contributed to the extinction of these animals. Another theory is that the increased aridity almost 18,000 years ago may have been a contributing factor while other proponents are of the opinion that climate change alone was the culprit in the eventual extinction of the Australian mega fauna

However, some Australian mega fauna did survive the holocaust and have survived almost two million years of climatic fluctuations before their sudden extinction. The advent of new technologies such as uranium thorium dating has conclusively proved that humans did have a major hand in the extinction of the australian mega fauna

Some of the species of living Australian mega fauna include:

The Red Kangaroo: This particular species of kangaroo is quite large with pointed ears and red brown fur that fades to pale below the body and on the limbs. The animal has a square muzzle and the males of the species are bigger than the female. An average male kangaroo can grow to a height of 6 feet and can weight up to 85 kgs while the females are smaller at 3.6 feet and 35 kgs. Females are a pale grey but in arid zones they may have the same coloring as the males. The tail of the animal often acts as a third leg and is used for balance while the forearms have small claws. The hind limbs are very strong and are used for jumping.

The Cassowary: These are shy, reclusive birds and the Northern and Dwarf Cassowaries are known to live in the deep dense forests. The birds are particularly adept at disappearing before humans become aware of their presence.

The Goanna: These carnivorous reptiles are predatory in nature and quite large with sharp teeth and claws. The largest reptile of the species is the Perentie; this reptile can grow to over 2 meters in length. The Goanna preys on small animals such as mammals, snakes, birds, insects and lizards as well as dining on the eggs produced by its prey.