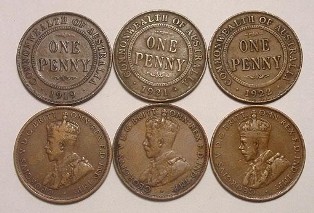 Are you an avid coin collector and want to learn about Australian pennies? Want to know about the history of currency coin production in Australia including the famed penny from the country? Read our informative and factual guide…

It is no secret that Australian coins including the penny hold a significant value for collectors and investors alike. It is a well known fact that the price of a collection of rare coins can increase greatly over a period of time and Australian coins are no different. In the current economic scenario when the stock markets around the world have taken a beating and the commodity markets are at their volatile best, investing in coins may be the safest option and can prove to be an investment opportunity with great potential.  Among the most sought after Australian coins are those that were minted in the pre-decimal Commonwealth era. As a matter of fact, the value of some of these Australian coins far exceeds that of ancient coins.
The Sovereign coins were minted in Australia since 1850; however the Commonwealth coins came onto the scene much later between 1910 and 1964. The currency used in the country in these decades was based on the denomination of the currency used in Britain which means that Australia used pounds and pence instead of the Australian dollars that are now in circulation. These commonwealth coins were minted in several locations including London, San Francisco, Calcutta, Melbourne, Perth, Sydney and Birmingham. The coin series were available in denominations such as half penny, one penny, three pence; six pence, shillings, florin, crown and the sovereign coins.

Among the most valuable coins of the era is the Australian penny from 1930 when can fetch a very good price. Some of these very rare coins are valued at as much as $200,000 while even those that are not so rare could fetch you in the vicinity of $10,000 upwards. Some of the highly valued coins include those that were minted in 1855, 1856, the 1858 sovereign and the shilling from 1933; the over dated three pence coin from 1922 also fetches a good price; Then there are the Australian pennies of 1925 and the half penny of 1923; all of these coins can get you well over $5,000.

A collection of rare Australian coins can make a sound long as well as short term investment. As a matter of fact, it can be conveniently proven through the use of price trends for these coins that the value of such acquisitions has increased an astounding 200 times which equates to an annual return of over 13%. So, these coins are far better than any other investment vehicle that is currently available in the financial markets.