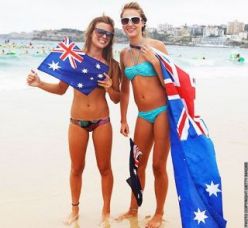 Learning Australian slang? Learn some Australia slang before you visit to avoid getting baffled by locals…

Australian slang can truly baffle anyone visiting down under from other parts of the globe. It’s a very colorful language, as well, which can seemingly be deciphered by natives only at times. However, some common slang terms have become universally recognized and are used by travelers to the country in order to communicate more smoothly with its locals.

The Australian icons which are recognized universally are the kangaroos, the vast desert, the late nature enthusiast Steve Irwin and Paul Hogan. The most common phrase recognized as an Australian catchall is g’day mate while Paul Hogan’s favorite phrase is recognized universally as ‘Throw another shrimp on the barbie!’ In his phrase the shrimp is actually a prawn and the barbie refers to a barbecue. Once you know, you know.

Even though the official language of Australia is considered to be English Australian slang offers some very strange variations on the language of our sovereign, the Queen. Often known as Aussie slang, or Strine the dialect can reflect the harshness of the Australian terrain along with the no-nonsense attitude of its people. There is a prevailing attitude of hard work and praticality, interspersed with humor. It is expressed in an endemic vocabulary and delivery that can seem very brash and hard nosed to certain non-native English speakers.

The phrase ‘a few kangaroos loose in the top paddock’ refers to someone who is not mentally stable. A commonly used phrase is ‘A over T’ which means to literally topple over.

The word abattoir refers to a slaughterhouse for animals while if someone were to lend certainty and credibility beyond doubt to a certain event they would use the slang phrase abso-bloody-lutely. The good word is often described as ‘acid’ which is considered the truth.

When someone is pretending to be distressed or sick they may be put down with the phrase of ‘bunging on an act.’ Australian rules for football, which are known as aerial ping pong in a derogatory way. A shark would refer to something occurring after dark. Drinking water is often known by the term Adam’s ale.

The term arvo refers to the afternoon while the Ashes is the cricket series defined as the test matches between England and Australia. When Australia won the first test match in the history the British actually burned the stumps in shame and since then the term Ashes has been used to signify this championship trophy. In fact, the ashes of the first loss by England are kept in an urn that is presented as a trophy to the winning team of the match.

The Volkswagen is called the vee dub car, which is an acronym for the V W, while relaxing and doing nothing is referred to as vegging out. A loony or insane person is described as a ga-ga, while a sweet reference to a foolish person is galah. A Queensland nut refers to the macadamia nut. A person who talks constantly and is a nag or a bore is called an ear basher in Australian slang.