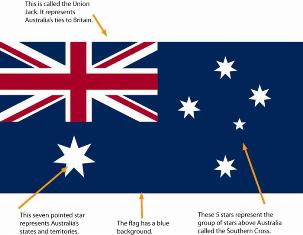 The design of the national flag of Australia was chosen from worldwide entries sent for a competition after the Federation. The flag was first used at a ceremony in Melbourne in 1901; however, the design was slightly altered in 1902 at the behest of King Edward VII.

This was followed by several other changes made to the overall design schematic over the years; some of these alterations were a result of confusion while others were a deliberate attempt to better the design. Finally, the current national flag was unraveled and was formally gazetted in 1934 while it was recognized as the national flag two decades later in 1954. The design of The Australian flag comprises of a defaced blue ensign; the ensign shows the Union Flag in the upper hoist quarter against a blue background; it also has a white seven pointed Commonwealth star

The fly has the Southern Cross constellation with five white stars, a five pointed small star and four larger stars all in white. The flag of Australia has all the prominent symbols linking it to Great Britain. These symbols bespeak of its historical bonds with England and include the Union Jack, The Southern Cross and The Commonwealth star. The flag symbolizes the country’s past as a British territory with representation of the six British colonies. A more historical perspective on the design suggests that the flag is a demonstration of Australia’s allegiance and loyalty to the British Throne.

Originally the Commonwealth star only had six points; however it has since been changed to a seven pointed star to symbolize the Territory of Papua. While the Common wealth star is in no way associated with the Beta Centauri, the Southern  Cross was included because it is the brightest constellation visible from the southern hemisphere. It is believed that the Southern Cross was included because the flag’s designer wanted the constellation to refer to the four virtues of justice, temperance, prudence and fortitude ascribed to each of the four stars.
The number of stars on the Australian flag seen today differs from the number of stars that were included in the original design. These stars have nine and five points each; however, in order to simplify the design, the British standardized an altered version of the flag with four large stars on the outside and one small star in the middle.