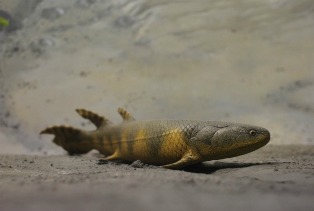 Eusthenopteron is a name given to a breed of fish that belongs to the Devonian Period. After having discovered fossilized remains of the fish in the Red Hill territory of Pennsylvania it was later discovered that similar remains were found in Norway, Canada and eventually Australia.

After observing the fossils in great detail it was determined that they dated back to approximately 375 to 359 million years ago. It is believed to be from the order of Osteolepforms and belongs to the family known as Tritiscopteridae. These types of fish are commonly known as Lobe Finned fish. The name of the order is derived from an ancient genus that has now become extinct known as the bony fin.

It had distally flattened limb bones along with bear jointed lepidotrichia. This would help to create a fringe of lepidotrichia on an area of the fin known as the preaxial margin. That would extend all the way up to the postaxial margin. The scales of the limb were large enough to overlap the proximal portion of the lepidotrichia. This would in effect give the fish its lobe finned appearance. The lepodotrichia found on this breed of fish have a relatively thin dermal structure that does not have any homology with the phalanges of the tetrapod digit.

The discovery of this breed of fish opened the way for discussion of evolutionary theory. Some scientists were of the opinion that the fish developed the ability to move onto the land due to repeated attempts over numerous years. However others have clearly indicated that any manipulation of the limb bones to create the tetropod digits could not have occurred in this manner. This is because the patterns found on the limbs of the fish are so distinct that they do not trace back to any known species of fish even though they may bear certain similarities.

In simple terms the Eusthenopteron found in Australia and other regions of the world is a fish that has legs. However when observed carefully we find that although the fish does indeed have legs it does not have any hands or feet. It is yet another evidence against the notion that the fish might have evolved from Rhizodonts because fossils of Rhizodonts have revealed that they had hands and feet indeed.

Thus it can be determined the so called “pod” of the tetrapods is not a new thing at all. Nonetheless it is an interesting discovery that has paved the way for further research and debate.