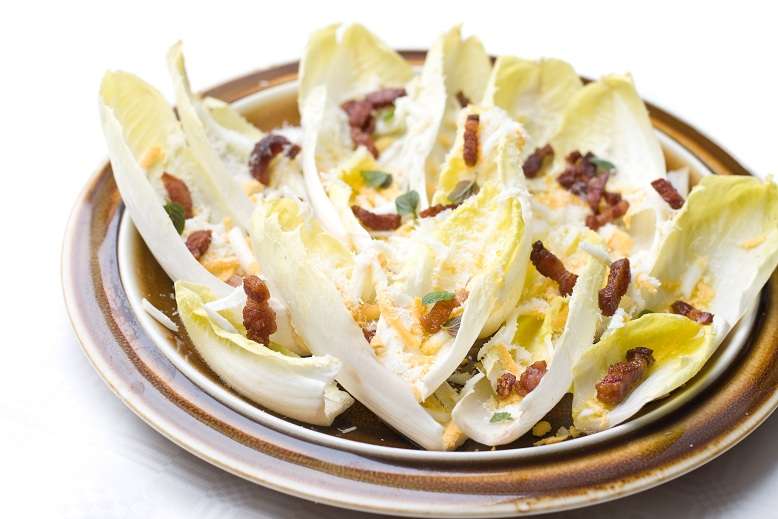 Interested in Belgian endives? Get an overview of this tangy, tasty and nutritious Belgian vegetable in our information guide.

The endive was discovered in Belgium back in 1830. The locals have been using it to prepare a wide variety of dishes since that time. Today chefs from all over the world seek to incorporate the Belgian endive in their recipes as they are known to add a lot of flavor to the food. Belgium is the sole producer of top quality endives in the world.

A bite into the endive releases a tangy burst inside the body that has a strong after taste as well. This unique vegetable is considered to be Belgium’s gift to the rest of the world. The amazing vegetable has a rich flavor and is extremely versatile. On top of this it has excellent nutritional value which makes it a source of gaining good health. It has a number of potent minerals whereas it is low in sodium. What’s best is that each leaf of the vegetable has only one calorie! The Belgian endive thus surpasses any other vegetable of its kind with these unique qualities.

The reason why the Belgian endive is regarded as being a versatile vegetable is because it changes its flavor according to the way it is prepared. Steamed and stewed endives are different in taste then broiled and baked endives. The Belgians make use of endives in everything ranging from caviar to truffles and saffron.

The delicious tangy flavor of Belgian endives makes it an excellent vegetable to use as topping for many different kinds of food items. It is widely used to season salmon and other seafood specialties. It is also used in caviar, cheeses and a variety of interesting sauces.

The Belgian endive also makes a great addition to soups. It is used in the Soupe de Bruxelles and adds a totally new dimension to the soup. It can be used with many other cream or meat based soups. The Belgians often make use of it to add some flavor to beef stews as well.

You can really enhance the value of a salad by adding the Belgian endive. The great thing about this super veggie is that it’s remarkably cheap despite having such great all round qualities. The color and tangy taste can really add a new shine to your salad. It can be used in combination with lettuce, radiccio, argula and watercress to prepare the ideal salad. The Belgian endive is also used as a component in oil based dressings.