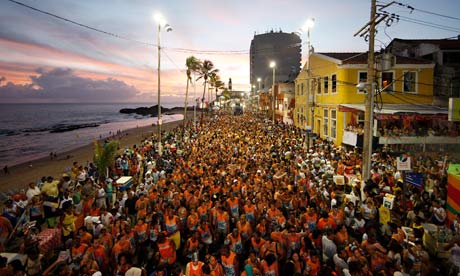 Brazil is a massive country. So who are the people that make up this amazing South American country and what is the population?

While it is one of the largest countries in the world, Brazil has a certain mystique surrounding it. Many people attribute that mystique to the diverse population. Like the United States, Brazil is like a big melting pot of cultures, all stemming from Native American Indians.

The population as a whole in Brazil speaks Portuguese, thanks in part to the early colonization of settlers from Portugal in the 1500′s. When the Portuguese settlers made Brazil their home, they eventually wiped out most of the Native American population, either through killing, relocation or assimilation through marriage. Then, they brought a large number of slaves from several countries in Africa like Angola, Nigeria, and the Ivory Coast area as they are known today.

Thanks to wars in Europe, the late 19th century and early 20th century brought additional immigrants to Brazil. Italy, Germany, Poland and Spain had a sizable immigration rate. In addition, Russia and Japan were two Asian countries that found conditions favorable and the population in Brazil welcoming to new people.

This co-mingling among the Native Americans, Africans and Portuguese population resulted in a large mixed race ethnic group that is present today. Whites still number a little over fifty percent of the population, but the multi-racial group is not far behind. The remaining population is a mix of blacks, Asians and other ethnic backgrounds.

Keep in mind too that these demographics for Brazil are based mostly on skin color. There are quite a few people who look white but have a healthy mix of Indian and even African blood running through their veins. Considering the ethnic mix of the population, Brazil does not really have any racial problems. Instead of judging people by their skin color, they judge by their social class.

Despite a growing economy, about twenty percent of the population in Brazil can be considered living in poverty. There are definite social class distinctions. The very wealthy typically stick to their own social strata while the middle class can somewhat mingle successfully with the both the wealthy and the lower classes.

The population of Brazil, for the most part, is concentrated along the coastal areas of the country. The small contingencies of indigenous people are primarily situated in the interior of the country, where some of the land seems inhospitable to the average person.

The people of Brazil come from a variety of ethnic backgrounds and thus bring a varied history that they share with the world through their many celebrations and festivals. While the population is colorful, the people of Brazil do not see skin color. If only other areas of the world were the same.

Facts About the People and Population of Brazil

According to the last major census in the year 2000, the population of Brazil stood at 170 million people. This means Brazil is the world’s 5th most populated country.

Despite having a high number of people in Brazil, it is one of the least densely populated countries in the world. It averages 20 people per square kilometer. This is mainly due to the fact that the majority of people in Brazil live in concentrated areas, leaving vast areas of the county uninhabited