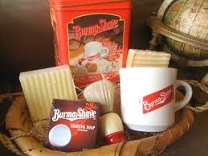 Interested in finding out more about Burma Shave and its quirky ads? Read on to find out about this shaving cream…

The Start of Burma Shave

The company started in 1925 and was originally an invention of the Burma-Vita company, both of which were owned by Clinton Odell. Originally the company was supposed to make medical balms that were created using ingredients from Burma. However, the production of the balm was not a success story and eventually had to take measures to expand their sales.

This was when the famous Burma Shave cream and its unique advertisements started. The ads were an instant hit and they continued to be a success till the 1950’s. Suddenly, after more than 25 years of success, sales dwindled to the extent where the company had to be sold to Phillip Morris.

Mr. Morris decided to do without the advertising that was initiated by the Burma-Vita Company and sales continued to drop. Finally the American Safety Razor Company bought the brand.They recognized the importance of the advertisements and decided to launch them again in the 1990’s, besides introducing Burma shaving soap and a brush kit. This move was often seen as ridiculous, owing to the fact that the original shave cream was supposed to be brushless and also that the brush was often made into a joke in the roadside sign adverts.

The Burma Shave signs were an innovative way to advertise the Burma Shave cream and were introduced in 1925 along most of the major thoroughfares in America. They were small signs, put in series along the roads and each sign contained an average of two words. When put together the signs would have a witty comment, asking you to use the shaving cream.

The company’s sales soared due to their witty advertisements however, the signs were initiated in 1925, when traffic on the road was scarce and motorists could concentrate on the signs. Also, with the advancements in motor vehicles and the introduction of cars with greater speeds, reading signs became less of a priority. As times changed, so did the media used to market different products, and the novelty of using small roadside signs slowly but steadily wore off.

Also, the cost of production increased over the years, especially after World War II, and sales began to fall. As the price of producing the cream increased due to more expensive ingredients, keeping the price of the shaving cream feasible for the common man became an increasingly difficult task. The high cost of production and the low sales started to affect the company, to an extent where it could keep up no more.

Although, the failure of Burma Shave cannot be directly attributed to the crash of its advertisements it was one of the biggest contributors towards the decline of sales, as they say out of sight, out of mind.