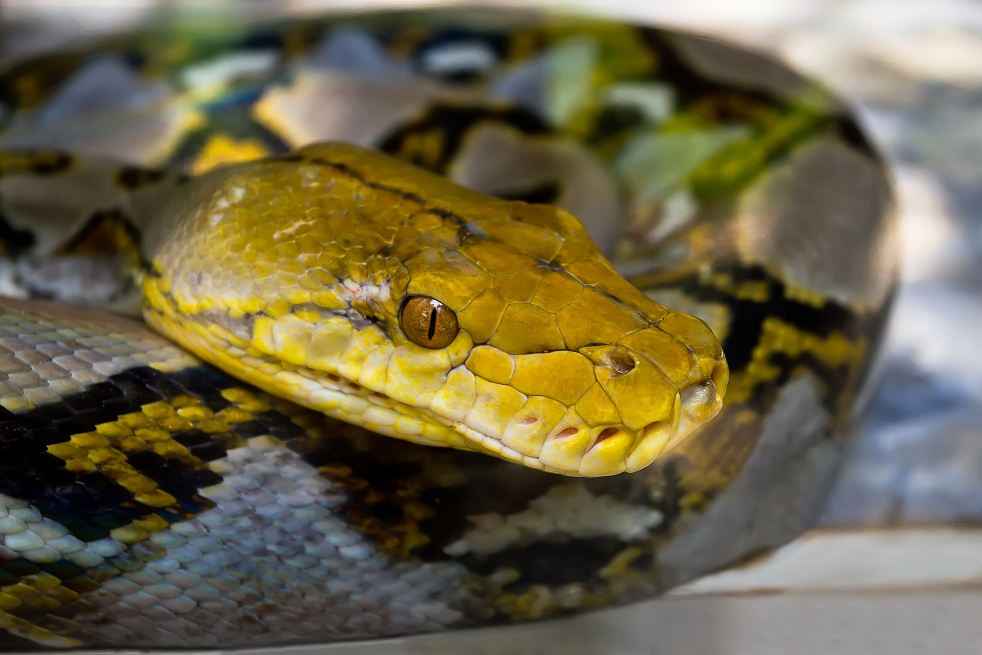 Are you interested in knowing about Burmese python teeth? Do you want to know the process by which they use their teeth to catch their prey? Read on to know more…

Burmese pythons are huge snakes and among the six biggest varieties on earth.  Their weight can reach even 200 pounds and the length attained up to 20 feet. Being constrictors, pythons do not possess fangs and they are also not venomous. The teeth which are present in a Burmese python curve backwards and are used for the purpose of capturing the animal in a tight grip. Once they have got hold of their prey, they wrap up the animal with their huge bodies and strangulate them.

In order to consume the prey, the Burmese python needs to make a huge gape. That is facilitated by the exceptionally flexible skull (kinetic skull). The lower and the upper jaws of the pythons along with the bones of the palate are attached loosely to a hard box which contains a portion of the skull-roof (parietal and frontal) and the braincase. The capability of moving freely is more in lizards than the quadrates. This is partially due to the decreased contact with pterygoids. Because of the supratemporals which are extended they are located significantly behind the cranio-cervical joint.  This increases the range of the gape even further.

Supratemporals are also connected with the skull in a loose manner, and can swing out in a lateral fashion. This is another factor influencing the mouth size and the throat width.  No contact of the bones is made in between the frontal portions of the dentaries, in order to maintain the capability to spread apart. Due to all these arrangements which are present in the jaws and skulls of the pythons, these creatures are capable of swallowing prey which is four to five times the diameter of their heads. The palatial elements and the jaw can maneuver in an independent manner along the midline with each bearing a sequence of very incisive teeth which are re-curved backwards.

The primary use of the teeth in a Burmese python is for catching its prey. For catching its prey, the python uses its powerful olfactory capabilities. These creatures are able to smell with the help of an organ named “Jacobson’s organ”. This organ is present in the roof of the python’s mouth.  By darting out their tongues frequently they can get the gases from the atmosphere. This tongue carries the tiny particles to the Jacobson’s organ for the purpose of smelling. Hence light is not very essential for pythons to catch their prey. They are capable of hunting in dense jungles in pitch dark conditions. It has been observed by the owners of these Burmese pythons that  newly-hatched pythons possess teeth 1/8 inch long, and when they become fully mature the length of the teeth increases to ½ inch.