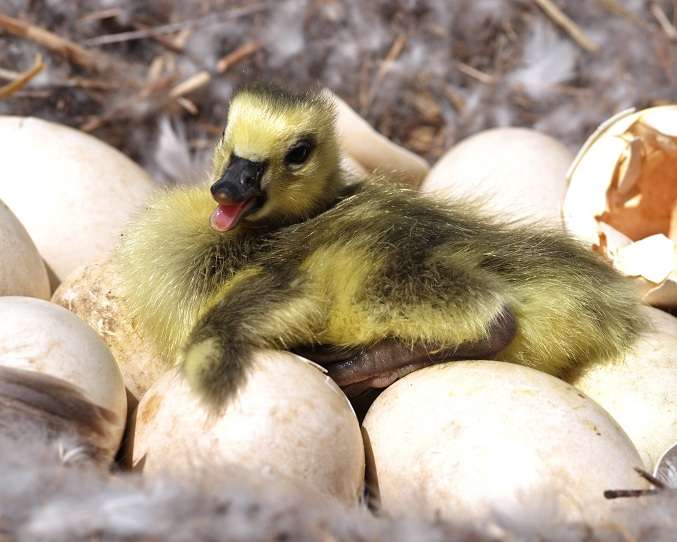 Need information on the Canadian goose egg? Find out more about Canadian Geese eggs and how they are nested and incubated by the Canada Goose…

The Canadian goose breeds once a year and females start laying eggs during the first week of March and may continue till as late as June in some parts of the Arctic region. Every season a Canadian Goose may lay anywhere from 2 to 9 eggs which average out to five eggs per bird.

The Canadian Goose egg takes approximately 23 to 30 days to hatch and 68 to 78 days is the time to fledging. The gosling will reach reproductive maturity by the age of one year on average regardless of whether it is a male or female.

Mating Traits of the Canada Goose

Since Canada Goose are monogamous the pair forms during winter when the birds are migrating. The pairs may also be formed on the winter grounds where they prepare for the following breeding season. Some mated pairs have a tendency to stick with each other for over a year and in certain cases Canadian Geese are also known to mate for life.

The males are known to fight for their females using their bills and wings and the winner of the fight then makes his way to the female in a unique posture with an undulating neck and the head down. After making honking and hissing noises the pair may mate prior to or after locating a prime nesting spot. Mating takes place during spring in the water where the female is most often submerged to quite an extent during copulation.

Since the female incubate the Canada goose eggs they choose the site for building the nest along with or even in the absence of the males and even build it themselves. The female Canada goose chooses nesting sites which have optimal visibility but are isolated. This ensures that they are able to sense and visually scout out any danger to the nest while ensuring that it is difficult to reach.

The males defend the nest, territory and the eggs from other geese as well as other intruders. Usually the nesting site is required to be close to open water areas ideally alongside low banks that can be entered or exited easily.

The nest location is usually in lakes, meadows, swamps or marshes and the most popular sites for nesting for Canada Goose eggs is perhaps the Alaskan shoreline which has massive areas of tundra habitat.

Incubation has to occur immediately after the last eggs are laid, and the female keeps turning the eggs on a regular basis to make sure they develop properly. They also change the positions of the eggs in the nest to ensure that the incubation temperature is even.

The Canada goose eggs hatch once the offspring is ready and the gosling uses an egg tooth which is a special tooth fitted atop its beak to strike a crack in the shell, a process which takes approximately 2 days to complete.

The simple nests are made very quickly with moss, twigs, weed or pine needles and after the materials are collected the female rounds out a depression with her body to get the optimal fit. The down insulates the eggs against extreme temperatures on either sides of the spectrum thereby maintaining a stable temperature for the Canada goose eggs to incubate.