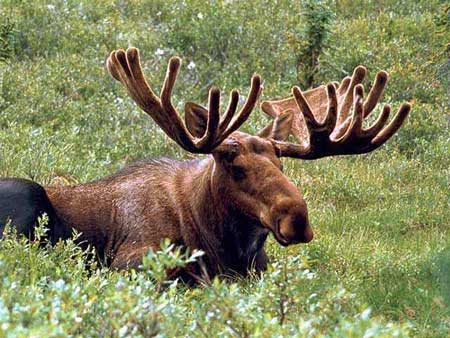 Looking for Canadian moose? Want to know about all the different types of moose available for hunting? Read our guide for more information on hunting the right moose for you…

The Canadian moose can be distinguished from other members of the deer family by its distinctive antlers. Deer antlers resemble twigs whereas moose antlers have a broad plate with short twigs. In Europe, the moose is known as an elk. The word moose is derived from ‘moz’, meaning ‘twig eater’ in Algonquian Eastern Abnaki, a Native American sub-language.

The Canadian moose can be found in almost all parts of Canada, being able to survive in climates ranging from the temperate to the sub-arctic. Moose are herbivores whose natural habitat include the boreal forest of Canada which is rich with maple and birch trees. They are large animals, with males weighing 380 – 720kg and females weighing 270 – 300 kg. A fully grown Canadian moose can stand more than 6 feet tall.

After the mating season, the Canadian moose will shed its antlers. It is believed that the antlers use up energy and therefore being without antlers will conserve a moose’s energy during the lean winter months. The moose antlers will re-grow in the spring and will be completely formed in about three to five months.

All Canadian moose are generally solitary animals and do not form herds for grazing. A female moose and her calf would, however, form strong bonds related to the maternal instinct. The male moose is known to be polygamous, seeking out several different females during his lifetime.

The usual kit required for moose hunting are large barrel rifles of at least .24 caliber and minimum 18.5” barrel. Canadian moose hunts prohibit the use of pistols. At least 40 rounds of live ammunition may be necessary for the duration of the hunt. Essential hunting gear such as knives, binoculars, scents and game calls are mandatory for every moose hunt.

The Canadian moose is prevalent throughout Canada and is a large, solitary animal. Its antlers are shed after the mating season to re-grow in spring. Moose hunts take place between mid-August and late October each year. Join a good hunting expedition to shoot your first moose!