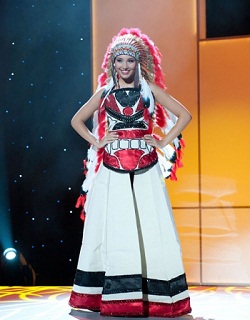 The whole idea behind these individual designs is to be able to tell apart and identify the tribes from each other simply by looking at their ornamentation, clothes and head dresses.

The most common apparel worn by Native Indian men was the breech clout or breech cloths which is basically a rectangular piece of cloth or hide which was tucked over a belt and the flaps were allowed to fall down in the front or the back. This was accompanied by leather leggings in cold climates.

Other tribes had a long fur trouser or short kilt instead of the breech cloth. However, most men did not use shirts during the summers but the Warriors did wear buckskin war shirts decorated with hair, beadwork, quillwork and ermine tails.

Naskapi Indians who lived in northeastern Québec and Labrador were semi nomadic hunters and relied on the caribou for food as well as the hides used for making clothing. They often wore painted caribou-skin coats to propitiate and honor the spirit of the caribou they hunted.

The Canadian native clothing was painted with pigments made from plants and natural deposits of yellow and red ochre and this was used to create beautiful decorations with elaborate designs on clothes.

The Indian people were known for their ability to run fast over great distances and this remains a valued tradition till today. Runners who were carrying messages of war or peace could traverse over large distances with fantastic speed covering the trails of what is modern day southwestern Ontario and New York State.

Since this was a matter of pride and a vital skill the moccasins of the Canadian native clothing were often highly decorated to celebrate the skill of the Iroquoian Indians.

The drum dances used to take place in huge snow houses which could house approximately 60 people at one time. The idea of these dances was to welcome groups of travelers and friends or to celebrate a successful hunt.

The dancers would move to the beat of the community drum and their actions were complemented by songs which recorded the daily aspects of life. The Copper Inuit always used to wear decorated dance garments during these occasions.

Since Canadian native clothing was supposed to cater to the brutal cold of Arctic life, it had to be one of the key survival tools providing physical protection and allowing others to identify who the wearers were as a people.

The traditional Inuit clothing included parka, mittens and pants made out of sealskin or caribou hide and was worn in one or two layers depending on the season. It is interesting to note that footwear could be up to four layers and each garment was tailored to fit an individual. The fabric for skin clothing was provided with the cleaned, tanned and smoked hides of various animals.

USA
Interested in the American eagle outfitters logo? Find out about the patriotic logo of

USA
Looking for Blackfoot Indian clothing? Want to know about all the different styles of