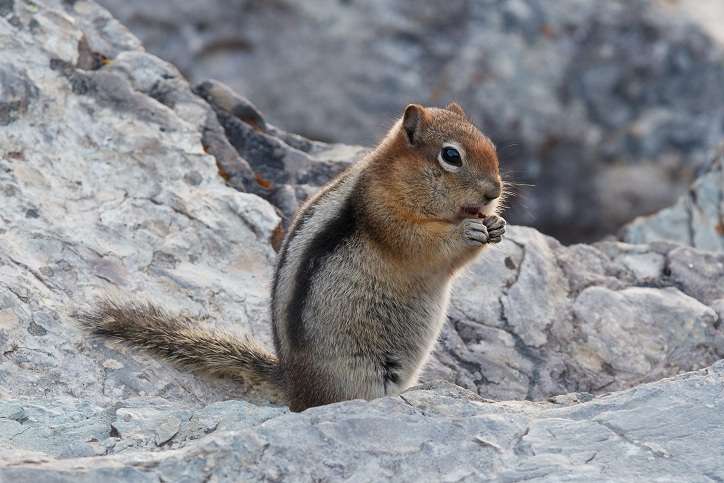 The terms squirrel is commonly used for the family of rodents known as Sciuridae. It comprises of two hundred and sixty two species which are located all across North America, Canada, South America as well as Eurasia and Africa.

A total of 22 species are found in Canada of these are four species classified with the names of S. Niger, Sciurus carolinensis, Tamiasciurus hudsonicus, T. Douglasii, and two classified as the flying squirrels Glaucomys volans and G. Sabrinus. ,

There are a total of sixteen which dwell on the ground comprising of six squirrels, of the remaining animals five of them are classified as chipmunks, four categorized as marmots and one classified as a prairie dog.

Squirrels generally are either ground dwelling or tree dwelling and their basic description differs based on this fact. On the generic level squirrels have five toes on the hind feet and four toes on the forefeet. The tree squirrel has a big and large bushy tail accompanied by small feet. Conversely ground species have lighter and smaller tails but more robust forefeet allowing them to navigate the land better.

Chipmunks and other varieties of the squirrel carry the food in the pouches on the inside of their cheeks hence they always look like they have a puffy face. As far as the flying squirrel is concerned it glides smoothly from tree to tree because of the skin fold along its flanks which is attached to its feet.

It is interesting to note that there is a big variation in terms of the size of squirrels. The smallest Canadian squirrel or chipmunk ever recorded weighed 50 g and was only 22 cm long compared to the largest Canadian squirrel on record known as the hoary Marmot and weighs 6 kg and has a total length of 80 cm.

The Canadian squirrels are known to reproduce once every year and mating time starts in spring. The gestation period for squirrels ranges from 24 to 44 days and the total size of the young litter ranges from 3 to 8 young ones and is largely dependent on the species. The young are poorly developed and completely hairless at birth but they grow rapidly and become strong very quickly.

Tree squirrels are active throughout the year and most of the ground squirrels hibernate during the winters. The main reason for this is that the tree squirrel can easily fetch food and survive during the cold winter monthswhich is not possible for the ground squirrels as they have to navigate through heavy snow and are not equipped to do so. Some of the squirrels are solitary but others are known to be gregarious. The ground dwelling Canadian squirrels dig deep boroughs whereas the tree squirrels in Canada build their nests on the trees.
Squirrels are found all across the landscape especially in mountains, prairies or residential areas and can cause failures to the maple tapping equipment as well as telephone lines. They are known to cause damage to cereal crops, and destroy agricultural machinery, harm livestock and damage hillocks or burrows since they tend to chew and gnaw on most items they come across.