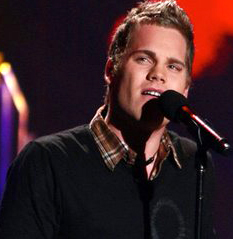 Want to learn more about the winner of the 2008 Canadian Idol, Theo Tams? Read on for interesting info on this Canadian singer who made it big by winning the Canadian Idol contest…

Theo Tams is the winner of the 2008 Canadian Idol which is a musical show that helps amateurs show case their talent on an international level. His debut album was titled Give It All Away to commemorate his contribution and commitment to the album. Theo Tams calls Coaldale, Alberta his hometown and is a very popular singer and pianist.

He has previous experience in writing music and was proud to create a debut album that reflects his musical background. He’s known for the hard work that went into creating the lyrics and music for the song and rather than rush the whole process he took his time and released a lyrically pleasing and well stylized album with Sony Music Canada Entertainment Inc. in 2009.

Theo Tams is a self taught piano player and has been interested in music since childhood and started indulging in learning music after high school when his teachers inspired him to look into pursuing music as a career.

His journey to reaching the finale of Canadian Idol 2008 is truly an inspiring one. He followed his intuition when auditioning for a spot on the show and it actually paid off. On each weekly show of the Canadian Idol Theo Tams enthralled audiences and judges with his command on the soaring vocals and pitch matched with intriguing performances.

The judges could see his talent shine through and actually commented on the fact that he is was of the best male singers on the Canadian Idol show to date. Once he was selected as the winner of the Canadian Idol 2008, the crooner was excited about starting off in a studio and letting on his creativity be utilized to prove critics of the show wrong.

It is interesting to note that the Canadian crooner released a single the morning after his win on the Canadian Idol show and the song titled “Sing” reached number two position on the iTunes Singles Charts which is a very outstanding achievement for a new singer and vocalist.

The most enthralling part about winning the title for Canadian Theo Tams was the fact that he won a record deal with Sony Music and started collaborating with some of the most credible Canadian songwriters like Simon Wilcox, Greg Johnston, Hawksley Workman and Rob Wells among others.

The gifted singer and song writer was commended for his notable commitment to creating beautiful music and songs for his album. He was fortunate to get singer Sarah Slean to co-write a song with Greg Johnston for his album. This indeed was an achievement and further boosted his credibility and standing in the music industry.

Following his success he was continuously releasing singles throughout Christmas and New Year and then managed to prepare for his first-ever cross-country tour with the Canadian Idol runner-up Mitch McDonald along with the second runner up Drew Wright. The tour was titled The Top Three Tour and included mind blowing performances from Coast to Coast across Canada in 26 cities.