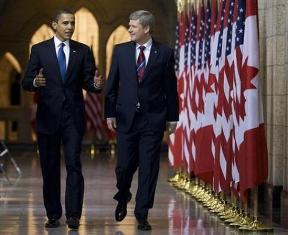 Barack Obama took the presidential office at a time of great economic and military crisis. He made his first trip to Canada as head of state soon after assuming office. The president of the United States had a series of talks with the Canadian Prime Minister Stephen Harper in an attempt to cooperate and resolve the complex issues that face both nations in particular and the rest of the world in general.

Minutes of the Meeting

The first meeting between the two heads of state took place in Ottawa. The two premiers discussed in detail the various possibilities that could be implemented for turning around the global economic downturn. Global warming was another important issue that was discussed during the meeting. The war against terrorist elements in Afghanistan was also at the forefront of the discussion. It was however the struggling nature of the economy that was of utmost importance to the two leaders.

The Canadian premiere raised the concerns of his country over the “buy American” US economic stimulus package that was recently passed. He expressed the nations concern over the possible negative consequences of this package. This is because the bill required that all public works projects must make use of only US produced steel, iron and other manufactured goods. The total of this package was estimated at $787 billion.

Since the two nations are tied under the obligations of WTO and NAFTA, the Canadian prime minister suggested that the stimulus plan should adhere to those obligations. Harper also expressed his desire to grow trade rather than contracting it. Obama on the other hand admitted America’s responsibility to act in a universally beneficial manner with regards to how it plans to recover from the current downturn. Prime Minister Harper announced that more than 7 million American jobs were actually dependent on trading activities with Canada and if this trade was cut down many jobs would be lost and hence this would further fuel the problems rather than solving them.

On a positive note Obama and Harper also made public the news of establishing a collaborated US Canadian clean energy dialogue with the objective of forging initiatives to combat global warming. Under this dialogue Senior officials from both the countries will work with each other for the purpose of developing cleaner energy, technologies and science. Such a move is definitely going to strengthen the joint research and development between both countries.

Discussion on War on Terror

The war in Afghanistan in particular along with the broader war on terror was also a serious matter of concern for both countries. Although Obama consulted the Canadian premiere on these issues he did not press for Canada to increase its contribution in the number of troops that are fighting the Afghan war. The efforts of Canada in Afghanistan are focused on training the Afghan army to be able to defend themselves once the foreign troops have evacuated.

Obama’s role in Canadian politics has brought the two countries closer on social, economical and cultural planes. The friendlier relations between the two nations are likely to bear fruit in the future.