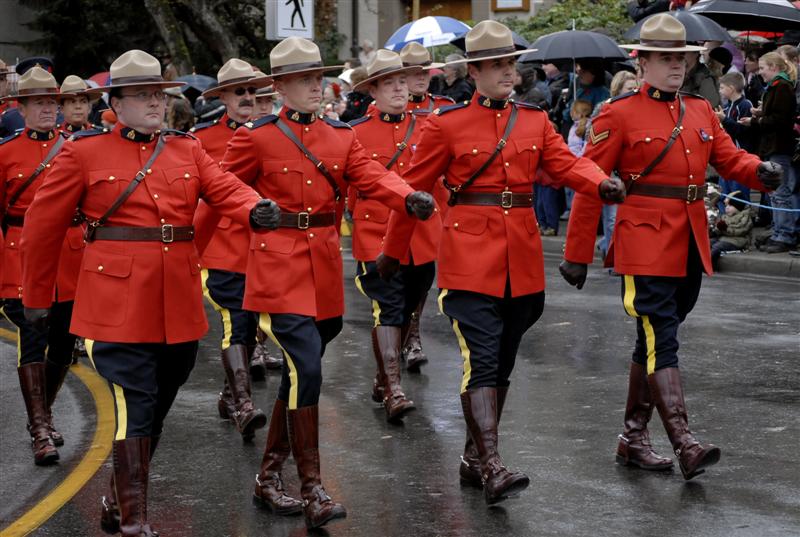 The Royal Canadian Mounted Police is well known for their very unique Red Serge or the Review Order dress uniform. This is a uniform consisting of a scarlet tunic with a high collar, breeches in midnight blue finished with a yellow leg strip, brown riding boots with spurs and a brown Stetson hat which is wide and flat brimmed.

Apart from this the uniform is finished off with a Sam Browne belt which has a shoulder cross strap and white side arm lanyard and brown leather gloves with gauntlets for the riders.

The Review Order is often worn by the Royal Canadian Mounted Police when they are performing the musical ride. This is an equestrian technique in which the horsemen demonstrate their skills of handling the cavalry lance. These maneuvers are performed with music and include a grand finale which is actually when the line charges with the lance carried horizontally and the tip of the lance faces forward as if the policeman is aiming for a mounted assault.

The Red Serge tunic which basically identifies the Royal Canadian Mounted Police was issued on the standard British military pattern and was originally produced from militia stores. This resulted in the prevalence of different types of tunic which were later on standardized for a uniform look and identity. The objective of this style was to emphasize the British elements of the police force and primarily to differentiate it from the American military uniforms which were blue in color.

However blue color shoulder epaulets were added as late as the 1920’s many years after King Edward VII granted the force Royal status due to the service during the Second Boer War. These were used to replace the gold trim on the scarlet straps from the earlier uniform. In present times any of the personnel who rank lower than inspector and are part of the Royal Canadian Mounted Police, are required to wear the blue color gorget patches on the collar. Officers who are from inspector to commissioner level have solid blue collars and matching pointed sleeve cuffs.

The dark blue and yellow gold strapping is a common British cavalry tradition which is translated into the Canadian city police force uniform with dark blue trousers and a narrow red strap depicting the artillery tradition. By around 1904 the wide and flat brimmed Stetson was officially adopted as part of the uniform of the Royal Canadian Mounted Police. During the winter the fur wedged cap replaces the Stetson and allows the Royal Canadian Mounted Police to battle the weather and protect themselves.