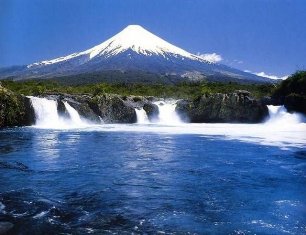 Chilean Volcanoes are legendary for their might and beauty. Of the 200 volcanoes in the Andes Mountain Range, 32 lie in Chile.

This volcano is credited as being the Most Famous and violent Chilean volcano. The Blue Hill in Spanish language is the active stratovolcano consisting of strata and volcanic ash – located in the Maule Region in Central Chile, immediately south of the Descabezado Grande volcano. This volcano lies in the South Volcano Zone of the Andes Mountain range and runs through Western and Central Chile.

It is capped by a 500 meter wide summit crater that opens up in the north. There are many flank vents and scoria cones on the lower slopes.  It has two separate caldera and five craters of which the most active one is the Quizapu Crater.

The calderas within Quizapu are the Cerro del Medio and Volcan Nuevo. The four other craters are named Carasol, Crater los Quillayes, Crater la Resolana, and Crater sin Nombre. They are as high as 2000- 3000 meters up the summit and the Quizapu Crater is located 3,292 meters up the volcano.

This is a subtle yet explosive Chilean Volcano. Mount Hudson a large Stratovolcano lies on the southern Andes where there are few active volcanoes and a North –South fault runs several kilometers west of Mount Hudson. The Caldera of Mount Hudson was ice filled and discovered before the short disruption in 1970 -71.

In 1970 – 71 the river level rose to an abnormal high and the fluctuations did not correlate to rainfall. The caldera began to melt and was the presumed reason for this rise but an explosive eruption occurred on August 12, 1971 with shallow local seismic activity.  In April 1973, the ground temperatures rose suddenly and 70% of the ice cover on Mount Hudson melted. There was no observable eruption. In 1991, aircraft encountered ash over Australia and 1 cubic km of airfall on Argentina in July. Then in August the andesitic paroxysmal phase was preceded by a basaltic fissure eruption. In September there was new mud flow and gaseous emission.

This 2,847 meters high active volcano in Chile sits above the lake and town of Villarrica. It is on the extreme west of the three huge straovolcanoes which run perpendicular to the Andes. The 6 kilometer wide caldera was created in the Pleistocene era 0.9 million years ago. A 2 kilometer wide postglacial caldera is present at the base of the active cone at the northwest margin of the Pleistocene caldera. There are approximately 25 scoria cones on the Villarica flanks and a few plinian eruptions and pyroclastic flows have been seen from this volcano. The mild to moderate activity with lava effusion has resulted in damaged town on its flanks.