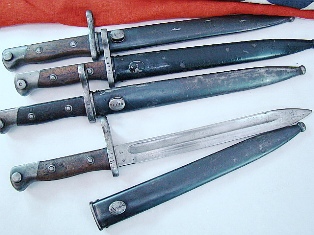 A bayonet is a knife like weapon that is made to fit over or under a rifle. The exact place where it fits is on the muzzle of the rife. The Chilean Bayonet came into action during the Two Great Wars experienced by the world.

The Chilean army has since then advanced to become one of the most technologically superior armies in all of America. However, back then the Chilean bayonet played an important role for the soldiers. As such the bayonet was considered to be a last resort weapon that was used as a close quarter combat weapon.

With the Chilean bayonet fitted on top of the rifle the soldier’s rifle would be transformed into a spear once he ran out of ammunition. When the enemy was close by the bayonet would function as a sword or a dagger with which the soldier would fight off the enemy.

The bayonet is no longer of use in today’s day and age. It is however a favorite for gun and relics collectors around the world. There are a number of different kinds of Chilean bayonets that were introduced at different points in time.

This bayonet is also known as the Mauser Knife and was manufactured back in 1895. It has seen the battle fields all the way up to 1912. The two companies responsible for manufacturing the 1895 bayonet were the Weyersberg Kirchsbaum and the Company of Solingen from Germany. Although made in Germany the bayonets were designed to fit the Chilean 7mm Mauser that was developed in the same year and thus the name.

The 1895 bayonet is well renowned for its excellent craftsmanship and was easy to convert into a handy knife. The high quality blade was single edged and featured the Chilean crest on the blade ricasso. The three intertwining circles symbol was also featured on the 1895 bayonet. It had high quality wood grips with two rivets on each side. The scabbard was blued and made out of metal complimented by an oval button frog stud.

This distant cousin of the 1895 original bayonet was developed in 1912 and served as the enhanced alternative to its predecessor. It was kept in use up until 1934. Various German manufacturers were contracted for the production of the 1912 bayonet and it was meant to fit the Chilean 7mm manufactured in the same year. In terms of design and construction they were pretty much the same but the 1912 version had a better performance and a more balanced weight that allowed the soldiers to convert their rifles into spears.

Chilean bayonets are hard to find in today’s times. However you can search for individuals willing to sell off the Chilean bayonets that they have. The price depends upon the model as well as how well the knife has been maintained.