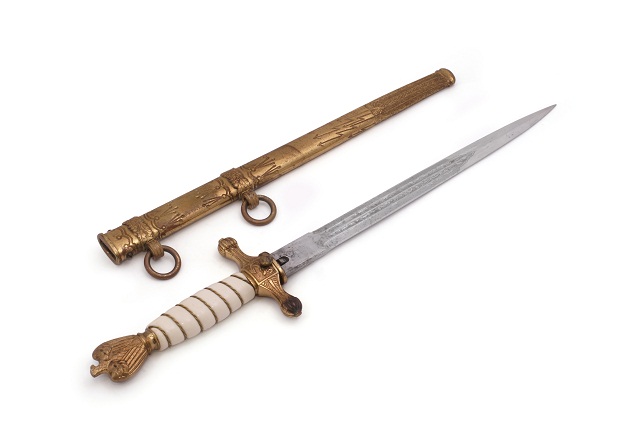 Interested in the German Ceremonial Daggers? Learn more about the fire, Land and Customs and Railway German ceremonial daggers…

The German Land Customs Dagger is considered very rare and desirable and carries aluminum fittings. The basic signs of wear and tear are evident all over the dagger and are a tribute to its authenticity. The leather grip has the basic wear acquired from carrying it while the scratches on the aluminum hilt and pommel are also acceptable. The wire was broken during its use and has been repaired, therefore is not original. The blade is almost in mint condition. There are long marks on some areas as it was removed and mounted back in the aluminum scabbard. The scabbard itself is in very good condition with minor scratches evident on its fittings. This particular model of the German commemorative dagger has signs of wear and tear on the leather and has three missing screws. The blade of course is maker marked and you can see the deep etching of the makers insignia and brand-name EICKHORN SOLINGEN, which is printed on the reverse side.

Another commemorative dagger is the 1st Model DR Deutsche Reichsbahn German Dagger, which is accompanied with a Portapee and scabbard. It is almost in mint condition and very rare. It is highly coveted amongst collectors. Known also as the first model DR Railroad Railway Service dagger, it carries a unique Silver Bullion Portapee. This dagger is in perfect mint condition on the scabbard and blade. It shows absolutely no signs of wear . Even the portapee does not carry any scratches on it. The blade is maker marked by EICKHORN SOLINGEN and also carries the squirrel logo in a very deep etching on its reverse side. Another commemorative dagger in the high leader category is the NSKK German chained high leader dagger. This customary dagger is very rare and has the chained scabbard. The maker mark of Max Weyerberg Solingen is evident on the reverse side of the blade. The standard model of “Alles Für Deutschland” is deeply etched on the top side of the blade.

When it comes to the NSKK dagger a near mint condition piece is available for auction.  There is a stamped marking of ‘P’ on the cross guard. Considered a mint condition dagger, it has one screw missing at the throat while the scabbard is blue and black anodized. The chain carries the logo of the RZM logo as well as the maker mark of M5/8 and the printing Musterschutz NSKK Korpsführuns on the reverse side of the blade.