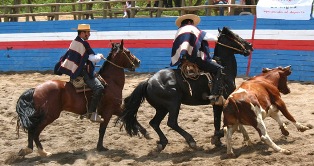 The culture of Chile has an overwhelmingly European touch to it. This is why many western travelers feel much more comfortable in Chile compared to neighboring countries of Bolivia and Peru. European style education of the Chilean population for centuries has given shape to Chilean culture in the form of rich music, art and architecture amongst other things.

Dance is a prominent part of Chilean culture. They actually have a national dance that goes by the name of Cueca. This dance was developed in 1824. Then you have the national song known as the Tonada. The Chilean music scene is influenced by the Spanish colonists but the cueca distinguishes it from the latter. The melody in Chilean music seems to be more prominent and intermediate melodic sections also lend it flavor. The mid 1900s saw a come back of Chilean folk music into the mainstream. Some of the most influential names in Chilean folk music are Los Cuatro Huasos, Los de Ramon and Los Cuatro Cuartos.

While the streets of many Chilean cities boast its architectural legacy in the form of homes, buildings and bridges the country also houses a number of important museums. However the Chileans are particularly renowned for their diverse and unique literature. The country is home to a couple of Nobel Prize poets including Gabriela Mistral and Pablo Neruda. Their homes have actually been turned to museums.

A number of contemporary Chilean authors have gained recognition around the world as well. The author of the House of Spirits, Isabel Allende and the author of Love and Shadows, Eva Luna are amongst the best Chilean international sellers. Other writers have become popular for their short novels and fiction stories.

The fact that Chile is spread over a diverse typographical landscape gives it an abundant variety of products to experiment with. Seafood is particularly popular in Chile due to the abundance of fish like Chilean sea bass and salmon. Furthermore a unique flavor has come into being with the fusion of local ingredients with Spanish traditions that came with the colonists. European immigration in great numbers has also had an impact on the cuisine culture of Chile. The Germans and Italians have also had a profound influence on the cooking styles and traditions of the country.

Soccer is the game of choice for the Chileans. People from all circles of life participate in this sport and the country is also home to a number of world renowned stadiums. Skiing is another widely practiced sport followed by surfing and basketball in terms of popularity.
The domestic film production scene is also regarded as being quite dynamic despite its small size. About 20 motion pictures are released from Chile on a yearly basis. Film makers from Chile have also managed to win certain awards for their efforts.