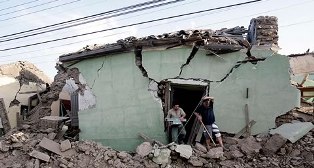 Want to learn more about the Chilean earthquake? Read on to get a comprehensive overview of the world’s greatest earthquake experienced in Chile…

One honor that the country of Chile would want to erase from its history is the fact that it was home to the greatest of earthquakes to shake the world as per recorded knowledge. This great earthquake took place in 1960 and literally shook the country to its core.

It may be that greater earthquakes have hit the earth’s crust however the scientists were actually able to measure this one. Hence the Chilean earthquake is the biggest earthquake ever measured, recorded and its ground motion strength verified.

The seismologists had a number of instruments which were used to measure the magnitude of the earthquakes. The equipment was designed in a manner that enabled it to measure the force of the energy that the ground releases during the earthquake. The Chilean earthquake is not the greatest earthquake because it wreaked massive havoc. In fact other earthquakes have caused more severe damage than the Chilean one. However it is the largest with respects to the amount of energy that was released and measured during the quake.

The exact epicenter of the earthquake was determined to be about a hundred miles away from the coast of Chile at least sixty meters below the bed of the Pacific Ocean. Two towns were foremost in receiving damages from the earthquake. These were the close by towns of Puerto Montt and Valdivia. Luckily though, the Chileans did not suffer massive loss of life. This was primarily because large aftershocks were experienced after the shaking of the earth’s crust which caused people to evacuate their homes and reach to safety.

The real shock came at least half an hour after the first few aftershocks. At this point in time the masses were trying to bring themselves to grips after experiencing the initial jolt. However all the buildings and homes that collapsed due to the earthquake had been vacated. Despite the fact that lives were saved the damage cost a loss of more than half a billion dollars.

Damage to man-made structures is given when it comes to earthquakes. However this earthquake had a huge impact on the crust of the earth as the huge amounts of energy from underneath caused serious changes.

The earthquake caused huge landslides and massive flows of rock and debris flowing down the mountains. The magnitude of the landslides was so great that some prominent rivers had their courses changed due to them. New lakes were created due to natural damming caused by the landslides.

The coastal city of Peurto Montt was amongst those regions that suffered landscape changes. The port city had its land neighboring the sea sunk downward into the ground. Ocean water flooded this coastal city. The subsidence of the coastal lands caused flooding in the streets of the village of Chile causing further damage.

The earthquake was to have its impacts felt far and wide. As a result of the Chilean earthquake massive waves and enormous tsunamis were sent traveling for many  miles across the ocean so much so that they even reached the Philippines and Japan.