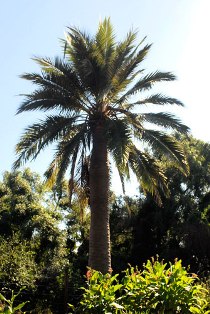 Want to learn more about the Chilean Palm? Read our guide for facts and info on Chilean palm trees…

Known as Jubaea Chilenis in the world of botany, the Chilean palm tree is unique in a number of ways. Better known as the Chilean white palm the tree is the only living species of genus Jubaea palm family.

The tree is native to the southwestern regions of South America. Central Chile has the largest numbers of the Chilean palm. The tree is also to be found in parts of Santiago, Valparaiso, Coquimbo, Northern Maule as well as O’Higgins. For many years experts believed the palm tree of Easter Island which has long been extinct stemmed from this very tree. However modern day classifications have placed it in a distinct category of its own.

The Chilean palm is regarded as being quite an impressive tree, although it is not particularly renowned for its looks. The striking feature of the Chilean palm is the ability of the tree to grow up to a height of twenty five meters. That is about eighty feet. The trunk of the tree can range up to 1.3 meters in diameter from its bases. However it gets thicker as it travels higher up. The Chilean palm is also characterized by its smooth bark.

Pinnate leaves stem out from the trunk often reaching a length of up to five meters. England boasts the largest indoor specimen of this wondrous tree at Kew known as the Jubaea Chilensis. The tree gets its unique name from a berber king named Juba II who was also a great botanist from yore.

Ideally the Chilean palm does best in regions that receive only mild winters. However it has the potential to tolerate frost down till -15C. At the same time it requires cool summers to grow to its best. These qualities of the tree have made it one of the hardiest pinnate leaved palm trees out there. This can be judged by the fact that the natural habitat of the tree is over 14,000 meters above sea level. The steep slopes of ravines are the natural wild habitat of the Chilean Palm.

The trunk of the Chilean palm releases sap that was used to create a fermented drink by the Chileans. Today the sap is available in the form of a syrup known as miel de palma. This is achieved by boiling the sap. However the collecting of sap from this tree requires it to be cut down. This practice has led to a massive decrease in the number of Chilean palms out there in the wild. The government of Chile has now placed protection laws in place to prevent the indiscriminate harvesting of the tree.

In the summer time the tree sprouts fruits that are about 2-3 centimeters in diameter and are completely round in shape. A hard shell on the outside protects the soft white meat on the inside. The sale of these nuts is common where Chilean palms are located in the vicinity.