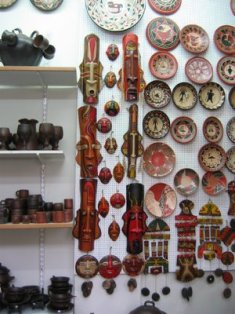 The Chileans are known to possess quite a hand at art and crafts. Coupled with their rich cultural heritage with Native American, European and Spanish influences traditional Chilean handicrafts come out very special.

Some unique traditional Chilean handicrafts are as follows:

This unique handicraft item is made using dried cactus. Colored cords can be seen decorated on the rainstick. Basically cactus spines have been inserted in a crisscross spiral starting from the top and going all the way bottom. The tube is sealed with wooden plugs. The hollow tube has some lava stones in it which move when the stick is in motion producing the sound of rain, and thus the handicraft item gets its name. The rain stick measures a total of 29 inches and is available for $24 in the market.

This is truly a one of a kind Chilean piece of jewelry. The artist has employed a unique technique known as glass fusion to prepare this piece. The necklace set features specially hand painted swirls and bubbled glass that has been kiln fired. The process resulted in the unique color variations that are to be found on the necklace. It is made using bubbled glass and metal and measures a total of seventeen inches in length. You can get your hand on this traditional Chilean handicraft jewelry for just $34.

Made using yet another unique technique which combines applying an enamel compound with copper and then firing them up in a special enameling kiln, these disk earrings are a magnificent specimen of Chilean handicrafts. The technique used to prepare this piece is very labor intensive as each piece is fired independently at one time. It has been painted with assorted colors of blue, white and red. Although special in terms of its technique and appearance, you can get your hands on these enamel disk earrings for just $14.

This is the region where the Native American art of basketry is still prominent. Bread baskets, sowing kits and placemats are some of the most commonly found Chilean handicrafts in this region. Lindura Bajo is also renowned for its unique wheat straw baskets.

Central Chile region such as Qunchamali are famous for decorative clay figurines. These are generally black in color with wet straw passed over them and are decorated with white geometric patterns. The region is also popular for its guitar cases, animal shaped piggy banks, miniatures, and metal work.