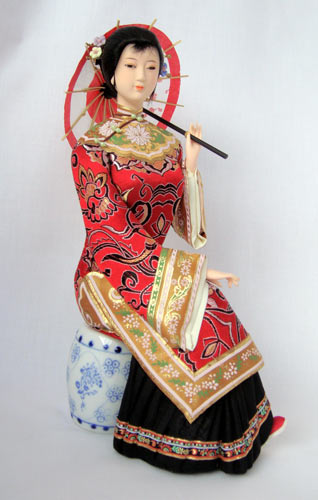 Interested in china doll head, dress & shoes? Find out about the unique characteristics of these antique china dolls.

China dolls are unique porcelain collectible dolls with glazed faces and painted legs. Germany is credited with being the first country to produce these dolls in mass. A unique element of the history of these dolls is that they were never produced as dolls in one go. Rather the Germans produced china doll heads, arms and legs and then exported them to other countries where they would be joined to a wooden or kidskin body.

While most of the later dolls feature life like hair the thing that set china dolls apart was the fact that the hair was actually painted on their heads. The painting varied to produce different hairstyles which became the identification standard for the china doll.

Generally two different kinds of trends prevailed regarding the china doll shoes. Most popularly the shoes would be painted on to the porcelain legs of the china doll much in the same way as the hairstyles. Hence you would have different style shoes simply painted on the porcelain feet of the doll. In most cases the socks and stockings on the legs would also be painted. On the other hand some china dolls actually had shoes made out of fabric or kidskin. But naturally these kinds of shoes could not last the test of time.

Finding antique china dolls in good shape is a tough challenge. Although many replicas of these dolls are available in the market the original china doll is worth a lot more in the eye’s of the collector.