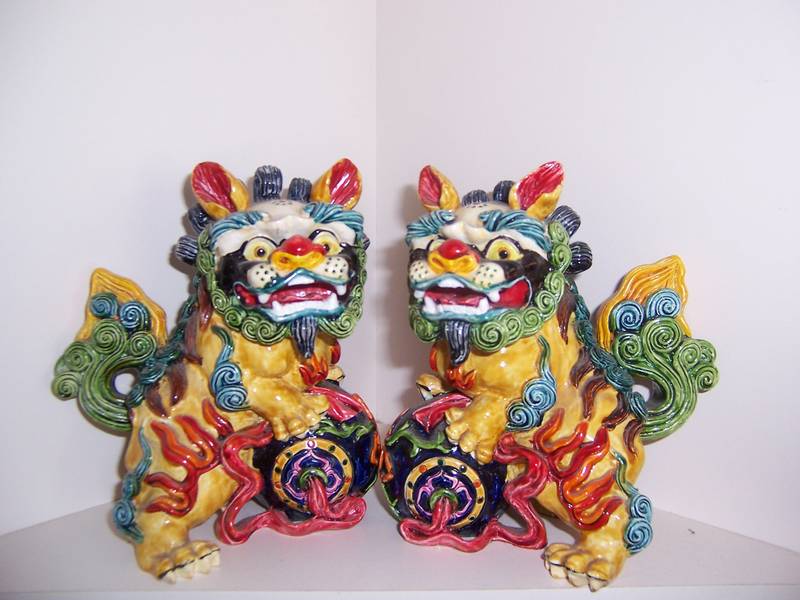 Find out about the highly revered species of the Foo dog in Chinese culture and the way it has been represented through various art forms.

The Foo dog is a unique breed that occupies a special place in many Asian cultures as it has been the official guard dog for Buddhist temples for many centuries. Traditionally, the association of this breed with the Buddhist dharma is of great significance to the Chinese and hence they have become a symbol of the Chinese culture.

This special breed of dog is characterized by its lion like appearance. In the Buddhist dharma the lion is considered to be a sacred animal. It was offered as a sacrifice to Buddha at numerous occasions. The lion-like dog gets its name from the Chinese language. In the Chinese language Buddha is referred to as Fo. Since the dogs were supposed to be guardians of the temples they were originally known as the dogs of Fo.

There are however a number of other theories that claim to be the source of the breed’s name. Some claim the breed gets its name from the city of Foochow where the dogs were popularly found. There is however no solid proof of this theory. The Lion of Korea is another title given to the Foo dog which is obviously because of its lion like appearance.

The Foo dog through the ages

The earliest traces of the Foo dog go back to the Han dynasty. The Chinese artists started depicting the Foo dog in various forms of art which can be traced back to 208 BC till 221 AD. There was a time period of about four hundred years after this era that the Foo dog completely disappeared from the scene. The reemergence of the Foo dog came about in the Tang dynasty that reigned over China from 618 to 917 AD.

As is the Chinese tradition of assigning deep symbolic meanings to pretty much everything, the Foo dog too was popular because of the symbolic meanings that it was tagged with. Ironically, the dog bears resemblance to the king of the jungle who is from the feline family. The Foo dog found its way into Chinese art with the advent of Buddhism in the country.

As a symbol the Foo dog was taken as a defender of the law and a protector of the sacred buildings. The use of the Foo dog was not just restricted to the Buddhist temples rather the locals would place the dog at business centers, estates and at the entrances of their homes as well. The tombs of the ancient and the government buildings of the ruling party were also seen hosting the Foo dog as a means of driving away evil spirits. The Foo dog became such a highly revered symbol that it was often presented as a gift to the emperor. The dog was more than frequently represented in sculptures and other mediums of art in China.

The Foo dog art collection that has been gathered over the years is of a diverse nature. The majority of the art work seeks to capture the role that the Foo dogs played as guardians of important buildings. There were other concepts like peace, serenity and tranquility that Foo dog art would represent.