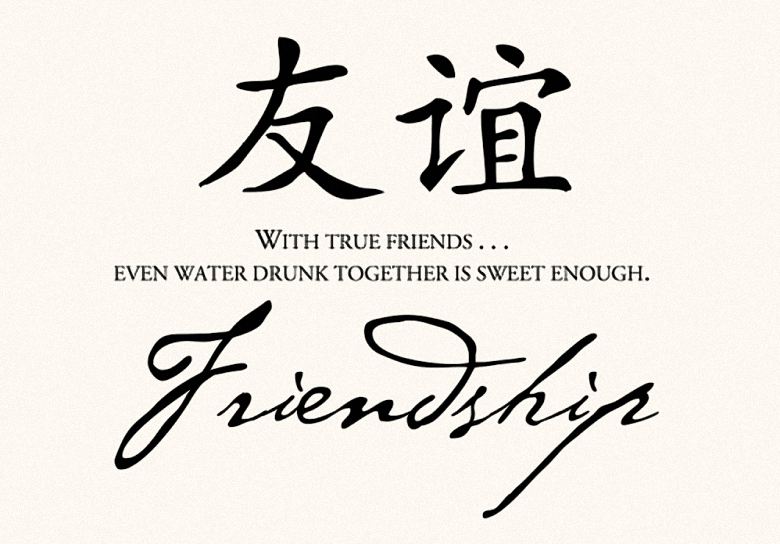 The Chinese symbol of friendship has gained immense popularity in the west. Find out about this cross cultural craze.

Chinese symbols are known to be mysterious and intriguing. Such is the nature of Chinese calligraphic art. Although the bulk of the symbols that are in popular use today were conceived many centuries ago they have only received slight modifications and have managed to maintain their beauty.

It seems as though Chinese symbols were created for the sake of art rather than communication. In truth however it is a mixture of both these aspects. This is because these symbols are the only means of communication in the Chinese language and there is no doubt whatsoever about the aesthetic value of Chinese symbols.

Friendship over the boundaries

Today the popularity of Chinese symbols has outstripped the boundaries of the country. The improvements in means of mass communications have resulted in a transfer of ideas and cross cultural interaction. Chinese symbols have had a big impact on the people living in the west who have been bedazzled by the brilliance of Chinese calligraphy.

This can be seen by looking at the various decoration items and fashion accessories that feature various Chinese symbols. The Chinese friendship symbol is amongst the most commonly used symbols in the west today.

This in itself shows how different cultures have learnt to appreciate each other and with time have even accepted ideas and concepts from each other. In this way the Chinese friendship symbol serves as a classic reminder of how an ancient trend from an alien culture can come to be so widely accepted as it is today.

The difference in perspective

The reason behind this is the fact that the two have been very distinct cultures since the beginning. Hence when it comes to the aesthetic sense of the Chinese civilization it comes across as something new and very unorthodox for the western majority.

This explains the fascination that people of non-Chinese origins have for Chinese symbols. The friendship symbol in particular can be seen being made use of in many different ways. But naturally best friends amongst the teenage section of the public exchange gift items that are marked with the Chinese friendship symbol as a token of their friendship.

There is really no limit to the ways in which the Chinese friendship symbol is being utilized and marketed in the west today. Actually many Chinese calligraphy artists and others have benefited from what has become the latest fad in fashion in the western world.

This trend has given those individuals trained in the art of creating Chinese symbols the chance to launch them on an international level by coming up with contemporary products that incorporate the use of different Chinese symbols.