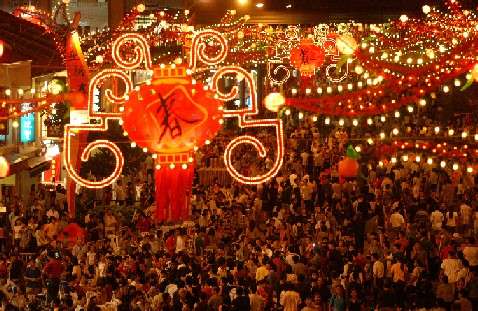 Find out how the Singaporeans celebrate the Chinese New Year with a twist.

Although there is a lot of activity going on out on the streets of Singapore during this time of the year the real celebrations start from the home. After the ritual house cleaning and renovation the celebrations begin with a family reunion dinner which is held on New Year’s Eve. Local community clubs often host open-house discussions for the night. This get together serves as a prelude to the wide range of entertainment activities that follow up for the next two weeks.

The show stopper is the event that is held on the night of the first moon. Known as Ghap Goh Mei this is the last event of the festive season. There are however a number of major events that are held between the span of the first fortnight of the year.

The most significant Chinese New Year events held in Singapore are the Chinatown Chinese New Year Celebrations, The Chingay Parade of Dreams and the Singapore River Hongbao. These events have now been showcasing for quite some years and continue to hold their charm for the locals.

Setting it up for the season

Chinatown is the most heavily decorated region for the Chinese New Year. Multi colored street lights along with traditional Chinese decorations liven up the city streets. Along the way you will get to see different groups performing various acts for the purpose of entertaining the maddening crowd. Traditional performances include the Chongqing troupe as well as the live acrobatic performances from Taipei.

Fireworks are a prominent part of the Chinese New Year celebrations in Singapore. One can witness the entire skyline brighten up with all sorts of dazzling skyrockets. Usually New Year’s Eve and the night of the first full moon of the year are the ones when the fireworks display is very elaborate.

Along with the celebrations taking place in Chinatown the Chingay Parade is one of the major events of the season. Other than that you will get to delight yourself with some of the traditional