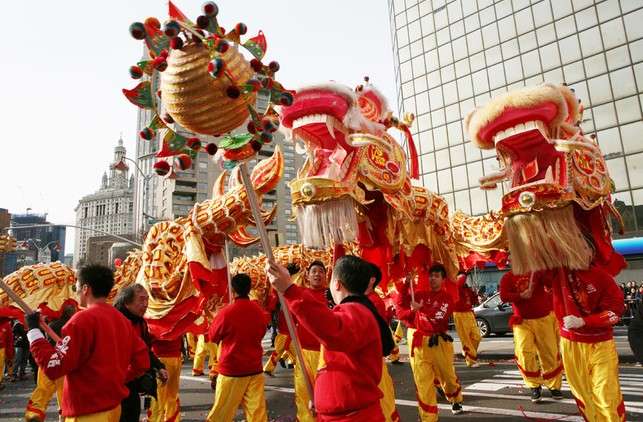 The Chinese New Year parade is the main event of the season. Find out about the unique traditional and contemporary elements of the parade.

The parade is one of the major events held during the Chinese New Year celebrations. It is lauded for its vivid pageantry and is considered to be the ideal display of ancient Chinese customs and traditions. As it is the New Year season is a time to hit home with ancient traditions and the parade becomes sort of a slide show of what Chinese traditions are all about.

Today you will find the New Year parade showcasing all those ancient traditions and mixing them up with a modern flavor in order to bridge the gap. The bringing back of ancient traditions serves as a great tourist attracting factor to which the modern amenities are added in order to make them comfortable. Hence the parade acts as a regeneration of ancient Chinese tradition as well as revitalization for all those present there to witness it.

The New Year parade that takes place in China today is based on the typical American marching format along with which there is the ancient traditional Lantern Festival. The essence of the parade is the dragon dance which is solely a Chinese tradition. Over the years however different western inspired ideas have been incorporated into the traditional parade such as marching bands etc which are not actually part of the Chinese culture.

The roots of the parade

The roots of the Chinese New Year Parade lie in the early civilizations that began to come closer on a communal level many centuries ago. With neighborhood connections developing into a deep friendship people started to get together and celebrate the coming of New Year in the form of processions and parades.

Today’s Chinese New Year parade is not localized to a neighborhood. Rather it has become a global affair that people from different parts of the world come over to witness whereas others watch the live television coverage at their homes.

The parade is a mix of electrifying performances as well as a display of the artistry present in the Chinese culture. Gorgeous and elaborately designed floats can be seen drifting along with the parade with fancy costumes along with the dragons and lions.

The colorful sights and sounds are accompanied by lots of noise as the fireworks continue to explode throughout the duration of the New Year parade. Fireworks are an important part of the New Year parade and the people really enjoy the deafening noises which would otherwise be termed as noise pollution.

The limelight of the Chinese New Year parade is without a doubt held by the dragon which is a puppet around a hundred foot long made from silk, bamboo and paper. Young men and women hold up the dragon and perform the traditional dragon dance that is accompanied by gongs and drums.