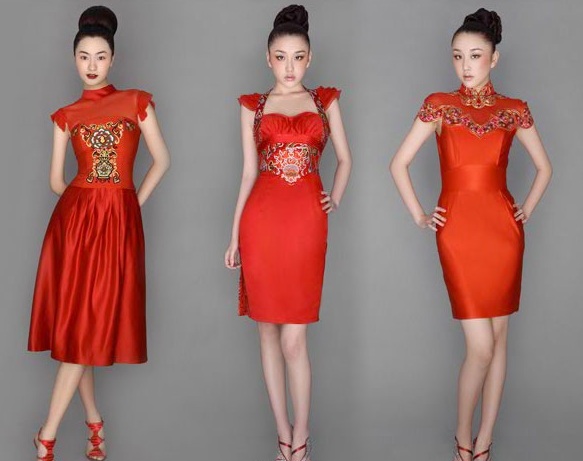 Interested in the Modern Chinese dress? Find out about the modernized versions of traditional Chinese dresses.

The traditional Chinese dress was profoundly elegant, extravagant and a prominent part of the culture of China. With the passage of time however the Chinese dress has evolved into something new. Today’s Chinese dress makes use of traditional elements fused together with contemporary styles in order to develop a revolutionary modernized Chinese dress.

One of the things that the Chinese fashion designers have retained from the dresses of the days gone by are the old school motifs. These include motifs that were popularly used in China such as abstract images of dragons, lions, opera masks and various other deities. The use of Chinese bronze is also prevalent amongst the modern day fashion designers. They use this to create printing, embroidery, woven and applied designs on clothes. Not only do the contemporary fashion designers make use of old school motifs rather themes of some famous Chinese paintings are also used as patterns in the modern Chinese dress.

The modern dress according to the occasion

The basic structure of these dresses remains the same but fashion designers have a limitless variety when it comes to composing the cut for the collar, skirt and sleeves. Similarly they create designs where they experiment with the length, width and height of the gowns. And then you have the printed designs as well as the embroidery to work with.

The use of macramé is quite popular as a means of decorating the shoulders, seams, openings, belts, pockets and even hair ornaments and necklaces.

There are many profound examples of modernized fashion dresses such as the new age bridal tiara. This contemporary evolution shot off from a design that was popularized during the Sung Dynasty coupled with the style of embroidery that was popular in the Hunan Province. The Hunan style is particularly emphasized on the design of the sash. Fashion designers make use of traditional colors such as green, blue and most importantly red.

Such examples go to show how the age old traditional Chinese dresses have served as the basis of contemporary Chinese fashion. The new age Chinese dresses have gained popularity in non-Chinese cultures as well as they have a touch of elegance cut out to appeal to the modern masses.

The Chinese people have largely adopted business suits, shirts and jeans as well. The designing of modern Chinese dresses is more of an art form and such dresses only come in use for special occasions like weddings and traditional celebrations