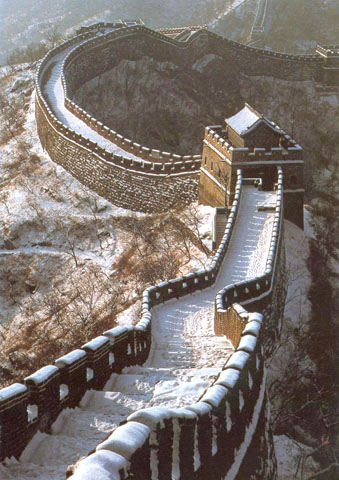 The Great Wall of China is one of the wonders of the world. It is a structure that is visible from space and has been termed as a World Heritage Site by UNICEF. This remarkable structure which is now a major tourist attraction of China was actually built for totally different purposes back in the Qin Dynasty.

Construction of the Great wall during the Qin Dynasty

It was under the leadership of Emperor Qin Shihuang that a unified China came into existence. This was around 221 BC when the emperor and his forces managed to overcome their enemies to create a unified Chinese empire for the first time.

The newly created empire was under constant threat of attacks from the northern regions. This was a region inhibited by the nomadic Hans tribes that were continuously engaged in plotting attacks against unified China. The Hans rebels made some successful attacks down at the Yellow River Basin where they managed to take certain portions of the Hetao Area under their control. The main area of tension was Ningxia situated at the Great Bend of the Yellow River.

The emperor thus sought a way to remove this persistent threat of the Hans rebels. In an attempt to bar their entry into any of China’s lands the emperor employed the construction of a great wall barrier. For this purpose the emperor assigned General Meng Tian a team of three hundred thousand soldiers who would fight the enemies and construct the wall.

Joining the fragments to form the Great Wall

This was the development that took place during the Qin dynasty. But many people would be shocked to know that this was not the inception of the Great Wall. In fact the wall had been built in many different regions prior to this period. The six ducal states had long built defensive walls around their territories for the very same purpose.

What happened during Emperor Qin’s rule was that the fragmented walls were transformed into the Great Wall. This was done by connecting the walls of the six ducal states and extending it even further. The finished structure of the wall stretched for thousands of miles resembling a serpent like body of a dragon. It started from the western region of Lintao and extended all the way up to Liaodong in the east. In the emperor’s time the Great Wall was dubbed as “Wanli Changcheng” which translates as the Ten Thousand Li Great Wall.

Sections of the Great Wall

The Great Wall as built by Emperor Qin had three different sections. The western section has the Min County of the Gansu Province as its starting point. It goes through Mongolia via the Guyuan County, makes its way through Shenmu and ends at the south bank of the famous Yellow River.

From Xinghe County starts the middle section. It makes its way through the Wulanbuhe desert, Guyuan County and ends at the Yinshan Mountain at the Yellow River.

The eastern section starts from Huade County goes through inner Mongolia and the Hebei Province and comes to an end in the Fuxin City of the Liaoning province.