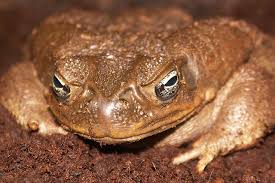 Giant toads of the Colombian region, which attain a length of up to 25 centimeters, are characterized by a poisonous parotid gland, and are capable of eating anything from insects and crops to snakes and mice. Read our guide for more facts and inform

Toads are amphibians, and hence can live on land as well as water. They are biologically categorized under several families namely, Bufonidae, Bombinatoridae, Pelobatidae, Discoglossidae, Rhinophrynidae, Microhylidae and Scaphiopodidae. They have several bumps on their skin, which aids in blending the animal with its surroundings. Giant toads, also known as Cane Toads or Marine Toads, are native to South America, Central America, Mexico and South Texas. Columbian giant toads are even heavier and bigger. Though both the species belong to the Bufonidae family, the former is called Bufo Marinus and the latter is called Bufo Blombergi.

Rolf Blomberg, a Swedish explorer, writer and photographer discovered an unknown species of a giant toad in southwestern Colombia in the year 1950. Having captured it, he took the specimen with him to his home in Ecuador, and a year later it was named Bufo blombergi, in honor of the explorer. Capable of attaining a length of 25 centimeters, measured from the snout to vent, this toad is heavier and more gigantic than Bufo Marinus that was considered the largest toad species in the world.

Appearance and habitat of giant toads

The Colombian giant toad weighs over 1.5 kilograms, and varies in color, from brown to red with dark and light spots on the body. The body tubercles in males have minute spines, and females are bigger with more patterns. Florida giant toads are likely to have originated in Colombia, and are found in urban and agricultural lands. They breed in canals, shallow pools and ditches, and during nights they are found to teem around house lights in order to eat insects. Besides, they eat native frogs and toads, and locate all types of food, eating even dog food.

The distinguishing feature of giant toads lies in the parotid gland, which is conspicuous and enlarged. These glands extend as far as the sides and secrete extremely toxic substances. The secreted toxin is capable of poisoning and even killing animals that happen to bite them.  An astonishing fact is that they are capable of throwing or shooting the venom to long distances in the form of a thick, whitish substance. When an animal or a person comes in contact with this substance, the result could be paralysis, blindness or as extreme as death.

As ‘toad-licking’ has emerged into a legend, claiming that the venom secreted from the skin of a few kinds of toads leads to hallucinations, the venom has been harnessed and utilized for medicinal purposes. However, it is toxic, especially to pets like dogs, which can be poisoned even by intake of water that has been in contact with such toads.

Though giant toads had previously been imported to agricultural locations to get rid of insects, they are now considered as pests. Further, Colombian giant toads have been threatened by loss of natural habitats, comprising tropical moist areas.