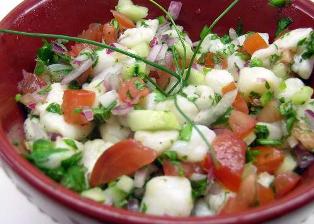 Interested in the cuisine of Costa Rica? Want to know how Costa Rican cuisine is served? Our guide gives you the facts & information you want to know.

Cuisine is a central part of life for people in Costa Rica, as it is a means through which people are brought together to enjoy each others company whether it be a special occasion or simply a daily meal with the family.  Costa Rica is a country whose cuisine displays influences of diverse origins, with everything from European to native South American and even African tastes being present in the cuisine of Costa Rica.

Costa Rican cuisine makes great use of appetizers which are present at most meals. Appetizers, known as ‘bocas’ in Costa Rica are usually served with drinks and often provided for free in many restaurants in Costa Rica. Some of the most popular appetizers served in Costa Rica include:

Ceviche: this is a salad made from marinated seafood.
Empanadas: breaded pies and pastries.
Gallos: These are tortillas served with meat, chicken, beans and lots of cheese.
Tamales: these are cornmeal patties with a stuffing and it is wrapped and then steamed inside banana leaves.

Salad is also an important part of Costa Rican cuisine. Served with most meals, a Costa Rican salad will typically consist of tomatoes, cabbage, peppers and onions which are chopped, mixed and served with lemon juice and some herbal seasonings.

Costa Rica is a country with a large agricultural base. This means that not only is there ample supply of good quality fresh food produces, but also the meals themselves are quite hearty and healthy. Costa Rican cuisine, like much other food in the region, makes use of kidney beans which are included in many dishes along with rice, chicken and beef.

Soups are an important part of the Costa Rican cuisine. The most popular soups of Costa Rica are the Bacalao which is made with cod, the Bean Soup, the Mondongo or the beef stomach soup, the Olla de Carne that is the Costa Rican beef soup, the Sopa de Albondigas or the soup that is made of meat balls, the Sopas de Leche or the Tortilla soup and the Sopa de Pescado that is the fish soup.