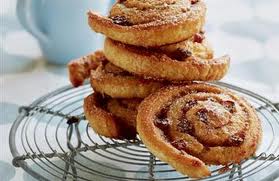 Danish pastry is perhaps the most well-renowned item from the Danish cuisine. It is a sweet pastry that is extremely popular in Denmark as well as the neighboring Scandinavian countries. Today it has become a common dessert item in the majority of the industrialized world. However you will find that its form differs from region to region. In some Spanish speaking countries they’re actually referred to as Facturas.

In essence the Danish pastry is much like a croissant, which originated from Vienna. It is believed that this pastry originated from Denmark, Norway, Sweden and Iceland. In Vienna however the pastry is known by the name of “Golatschen”.  It is also believed that the origin of this pastry might be from the Turkish Baklava. One of the most unique aspects of Danish pastries is the fact that they feature laminated dough.

The traditional Danish pastry is made using flour, milk, yeast, eggs and butter. The process starts off by rolling out a yeast dough and then coating it with butter. This has to be folded up into numerous layers. In order to make it easier to handle the dough it is advised to chill it for a couple of hours. The entire sequence of buttering, folding and chilling has to be repeated a number of times in order to create a fluffy and flaky dough. However as mentioned above the methods and processes of making Danish pastry vary from region to region.

According to the traditional manner of consuming Danish pastries, they are to be topped with rich chocolate or icing and sugar.  Another tradition is to have jam filled Danish pastries. Similarly they can be consumed with marzipan or custard. The pastries are prepared in a number of different shapes including circles that have their fillings in the middle. This type of shape is known as the Spandauer. Then you have the figure eight Danish pastry which is relatively larger and more creative looking. The pretzel like kringles are also another popular variety consumed across the world.

In the UK Danish pastries are consumed with a variety of different ingredients including jam, apricots, custard, almonds, raisins, pecans and caramelized toffee. All these ingredients are placed into different sections by dividing the dough following which the pastry is baked. As a final touch a dash of cardamom is added so as to increase the aromatic sweetness o+f the Danish pastry. Cheese is also a popular topping in the US and Canada although it is not usually seen in the country of its origin. One of the most exquisite varieties of Danish pastry features a rich filling of mixed nuts.

The tradition started off in Denmark during the 1850s has reached all across the world with the passage of time. Today Danish pastries are consumed all over the world and are easily available in bakeries and confectionery outlets.