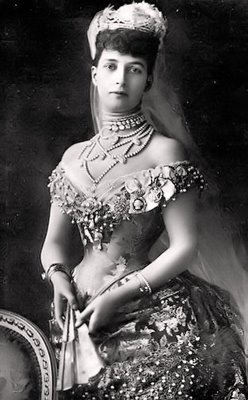 Queen Alexandra of Denmark was born on the 1st  December 1844 and passed away on 20th of November 1925. She was the Queen of the United Kingdom and the British Dominions. She was also the Empress of India during 1901 till 1910 as the consort and wife of Edward VII.

How Alexandra became a Princess

In a sudden twist of fate the family of Princess Alexandra of Denmark was thrown into limelight. This happened when her father succeeded his distant cousin to the Danish throne. She was at the tender age of 18. She became the wife of Albert Edward, Prince of Wales who was the heir of Queen Victoria. She held the title of Princess of Wales from 1863 to 1901. This is the longest time that a princess has held that title.

She was immensely popular with the British people and won their hearts. In fact her sense of style was so amazing that it was copied by all the fashionable women in the UK. She did not have much political power but always tried unsuccessfully to sway the opinion of ministers and the ruling party. She tried to extend benefits to her relatives who ruled Denmark and Greece. Her activities were restricted to supporting charities in an uncontroversial manner.

Succession to the throne

After Queen Victoria died in 1901, Albert Edward was renamed to the title of King-Emperor and Edward VII. Princess Alexandra of Denmark was given the title of Queen-Empress consort who following the death of Edward VII in 1910 retained the title of queen mother until her death.

She was given the title of Queen Mother Century as the queen and mother of the ruling monarch George V. He ruled the United Kingdom while she was alive. Generally she was referred to as Her Majesty Queen Alexandra. She was a strong supporter of George V during the World War I. This was a war where her support assisted Britain and their allies in defeating Germany. She had great distrust for her own nephew Kaiser Wilhelm II of Germany and proved her loyalty to her son.

She was born in Copenhagen and was known as Alex in the family. Her birthplace was the Yellow Palace. She had royal blood but a simple upbringing. Interestingly enough Hans Christian Andersen was often invited to relate stories to the royal children at bedtime.
Prince Christian the father of Princess Alexandra Denmark was given the title of the Prince of Denmark. This happened after a succession crisis arose and Frederick of Denmark needed the right successor. They continue to work and earn money for their upkeep. Their life continued to remain humble. In fact it was the Crown Princess Victoria from Prussia the sister of Edward VII who chose Alexandra as his wife.