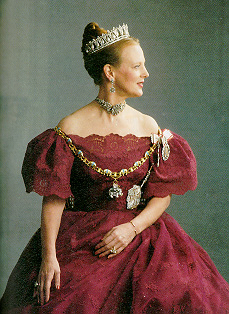 Want to know about the Danish Queen Margrethe? Learn more about the first female monarch of Denmark Margrethe…

Margrethe Denmark was the first female monarch in Denmark following Margaret I who ruled the Scandinavian countries. She ruled the region from 1972. She was born in April 1940 at the Amalienborg Palace.

Early Life of Marguerite of Denmark

Princess Margrethe of Denmark was the child of, Crown Prince Frederik and Crown Princess Ingrid. Baptized on 14 May 1940 she was given an Icelandic name. This was as a tribute to the people of Iceland because King Christian X was at that time ruling King of Iceland. This is the reason for the th in the name or the Icelandic thorn character. She also had two younger sisters one of which is Princess Benedikte who resides in Germany and Queen Anne-Marie of Greece who resides in London.

The godparents for the Princess were the leading royalty of the Scandinavian countries. These included King Christian X, Prince Knud, Prince Axel all of Denmark. Also from Sweden she had King Gustaf V, Crown Prince Gustaf Adolf, Prince Gustaf Adolf of Sweden and the The Duke of Connaught.

She was given an official motto as Queen Margrethe II. This reads: The Help of God, the Love of the People, the Strength of Denmark.
Queen Marguerite, Denmark — Heiress Presumptive

When Denmark’s Margrethe was born the rules allowed only the male heir to accede the throne. In 1850 the new succession laws were enacted, which specified male heirs only. Since she had no brothers everyone assumed that her uncle known as Knud would eventually take over the throne.

This was followed by a referendum on 27 March 1953. Following this referendum an Act of Succession was finalized. This allowed female succession to the Danish throne. However, the rule allowed only for the lack of a male sibling. This was known as the cognatic primogeniture. Since Princess Margrithe of Denmark did not have any siblings she was the Heiress Presumptive.
Following this rule she was given a seat in the Council of State at the age of 18 in 1958. In the absence of the King she would chair the meeting of the council.

Education and Marriage of Margrethe Denmark

The Princess was known to have studied pre-historic archaeology at the esteemed Girton College, Cambridge in 1960. She went on to study at the Aarhus University from 1961–1962 and majored in political science. Following this she joined the Sorbonne in the year 1963. Her education was culminated in 1966 at the London School of Economics.

Her marriage took place on 10 June 1967 when the princess married Count Henri de Laborde de Monpezat who was a French Ambassador. The wedding took place at the Naval Church of Copenhagen. Here the groom was presented the title as the new spouse of the heiress presumptive. This title was “His Royal Highness Prince Henrik of Denmark”.