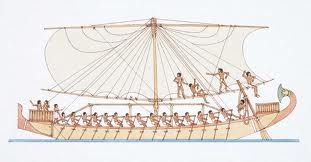 Egypt was gifted with a massive water body known as the River Nile. Flowing over a vast expanse of land the River Nile was the ideal route for transportation across Egypt. In order to utilize the waterway as a transportation route the Egyptians were required to construct boats. Ancient Egyptian boat designs varied according to the purpose that the boats were supposed to fulfill.

Primarily boats were constructed for the purpose of transportation, fishing and leisure activities. Ancient Egyptian boats can also be seen depicted in ancient Egyptian hieroglyphics and they also played an important role in Egyptian religion and mythology.

Archaeologists have not been able to discover many actual remnants of boats from the old Kingdom. However a number of remains were unearthed in Abydos and Tarkhan. Perhaps the best living example of ancient Egyptian boat designs was discovered in the form of King Khufu’s ship. This ship has been one of the prime examples through which historians have been able to learn how the Egyptians created the ships during that period of time.

A number of boats from the first dynasty were discovered in Abydos. The boats have a specific plan of 25 meters and were about 2 to 3 m wide. With a depth of just 60 centimeters the boats could seat up to 30 rowers. They were characterized by prows and sterns that would narrow along the length and there is a considerable amount of evidence that goes to show that the ancient Egyptians would also adorn their boats by painting on them.

The boats were made of wood which caused them to decay over time and hence historians were not able to conduct a comprehensive analysis. The opinion of the majority is that the wood used for Egyptian boats during the first dynasty was cedar. The manner in which the boats were constructed is quite obvious. The Egyptians would cut out planks of wood which would then be lashed with each other using tools that were fed through specially created mortises. The wooden planks had seams between them and reeds were used to caulk them. Unlike modern-day boats the ancient Egyptian boat design did not factor in internal framing. An uncovered boat would appear to be twisted.

Ancient Egyptian hieroglyphics and pictures are loaded with images of boats and ships. The tombs and temples at Medinet Habu and Deir el Bahri are particularly popular in this regard as the walls of these structures display many different models of ancient Egyptian boats. It is through these hieroglyphics that historians have been able to analyze the boat making tradition in ancient Egypt more than the actual remains that have been discovered. Nonetheless historians have very little knowledge about how the ships were constructed in the new Kingdom.