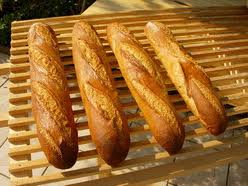 Have you ever wondered about how the French got the recipe for their famous French baguette? Are you curious about the history of french baguettes. Read our guide with fun filled facts and information…

The French baguette is synonymous with French culture all over the world. This French bread pronounced  buh’ get is the most prominent symbol of Parisian life the world over. The bread is made from lean dough without the inclusion of preservatives. It is against the law in France to use preservatives in bread. So the baguette is made everyday in bakeries across France. The bread is characterized by its long length, the slit cuts on top, that are actually made to enable the proper expansion of gases which in turn is responsible for the crumb or the soft inner part of the bread and the crisp delicious crust. A baguette can almost be as long as a meter and the size is usually place or town specific. In Paris a baguette usually weights about 250 gms. It is the bread that is known as the French bread in England and all across the world.

A freshly baked baguette is simply too mouth watering to be resisted and it is not unusual to see many people sitting on a park bench in Paris in the morning enjoying a fresh baguette with jelly. The present day baguette is considered to be the descendant of a type of bread from Austria which was appropriately called ‘pain viennois’ or Venetian bread since it was made in Vienna. These were then made in deck or steam ovens which were common in Vienna but they were brought to Paris in the mid nineteenth century. The first French baguette was baked in these ovens and there has been no looking back for this bread since then.

As a matter of fact, long loaves of bread were a part of French cuisine long before the introduction of the baguette and it was not unusual to see six feet long breads being carried by maids to their homes with other breakfast items. Not only are the baguettes delicious they also serve another purpose. A law in France in the twentieth century did not allow bakeries to make their employees work between 10 pm and 4 am which meant that the bakeries would open later than in other countries. This did not leave enough time for baking fresh loaves of bread for breakfast. The long baguettes on the other hand can be baked easily and quickly due to their shape and was a perfect solution for the problem.

Today the French baguette is as popular as the French sourdough bread but the only difference is that the baguette is freshly made each day because in the absence of preservatives it goes stale within 24 hrs. This holds true for all breads sold across France but the sourdough bread has the natural preservative qualities of the sourdough and can last for almost one week. Now a days most bakers are being very creative with their baguettes and use whole wheat flour, rye and even sourdough to make baguettes. Of course you no longer have to take a trip to Paris to enjoy an authentic French baguette as most local bakeries make them.