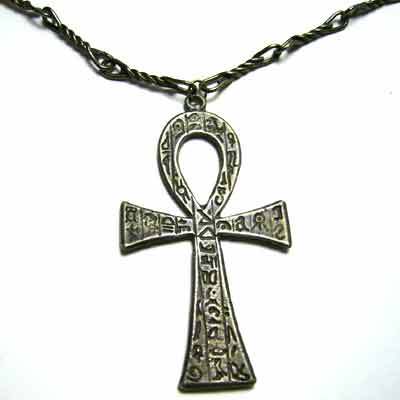 Want to learn more about the Egyptian ankh? Read on for facts and info about this historical symbol and the various symbolic meanings attached to it…

The Egyptian Ankh is by far one of the most popular symbols to have been used in ancient Egypt. The ankh was actually used as the hieroglyphic sign which was meant to depict life. With the passage of time this symbol was Christianized and is widely used in church buildings today. It is also used as a decorator motif when creating artwork inspired by ancient Egyptian traditions.

Historians believe that the symbol of the ankh actually evolved from an ancient Egyptian glyph that was used for representing magical protection. The exact symbolic representation of the sign is disputed until today. Renowned Egyptologist Sir Alan Gardiner was of the opinion that the symbol depicted the sandal strap along with its loop but if this was the case then it would be virtually impossible to determine the symbolism attached with the Ankh. Although the idea has largely been shunned some modern writers agree with Gartner’s opinion. What has caused modern writers to accept that notion was the fact that the Egyptian word for this particular part of the sample was “nkh”. Since the consonants of this word for the exact same as were used for the word “life”.

According to another theory the Ankh was meant to symbolize the sunrise. The loop at the head was the sun disk which was rising above the horizon. The crossbar in meant to represent the horizon line. The path of the sun was picked up by the vertical bar.

Other theories associate the ankh symbols with another important ancient Egyptian symbol known as the “Knot of Isis”. Both these symbols were used for ceremonial girdles. Egyptologists such as Wolfhart Westendorf believed that the ankh was associated with the Royal cartouche that bore the name of the King. There are still others that associate the symbol with a penis sheath.

Another concept that has gained popularity in recent years is to consider the ankh symbol to be sexual in nature. In fact tour guides in Egypt are fond of telling tourists this particular version of story. When viewed in this manner the top part of the symbol is meant to symbolize the female sexual organs whereas the stump descending down represents the male organs. The line that crosses at the intersection are meant to symbolize the children that come about because of the union.

The Egyptian Ankh has also been understood as being an aquatic symbol representing water in purification rituals of the Egyptians. In some of the rituals the team was made to send between two deities, one of whom was Thoth. Once the king had taken possession water would be poured over him through libations that were created in the form of the ankh symbol. Throughout the history of Egypt many deities have been depicted carrying the ankh symbol in some form or the other. Amongst the gods and goddesses that have been shown along with this symbol include Ptah, Anqet, Osiris, Satet, Tefnet, Hathor, Ra, Anubis and many others.  The ankh sign would be accompanied by a scepter. It would also be placed in front of the face of the King representing the breath of eternal life.