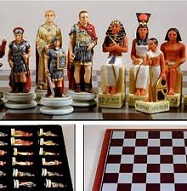 Although the game evolved in Southern Europe during the later half of the 15th century, its original origins are attributed to a game of similar nature which was played in the Indian subcontinent much before that.

Specifications of the Chess Game

The game is played on a checkerboard which is of two different colors and square in shape. There are a total of two players in this game and each has 16 chess pieces under their command. These include the King, the Queen the bishops, the knights as well as the rooks and the pawns.

The chessboard is normally formed out of different materials like wood or metal or even plastic resin. Similarly the chess pieces are formed out of metals, pewter or plastic and even marble and glass. The more expensive the material the more costly this set is. Furthermore if these chess pieces are carved with precision and detail they become collector’s items and are extremely expensive.

If you’re looking for Egyptian chess pieces then you can get beautiful chess sets which are heavy and intricately detailed. They are crafted out of different metals like pewter and even Ivory.

The chess pieces utilize symbols from ancient Egyptian culture and heritage. These include the pyramids, the Sphinx as well as Queen Cleopatra, King Julius Caesar or Mark Anthony among others. These may be hand carved and glossed over then painted on the top for graceful detail.

The classic Egyptian chess set is created in pewter and really brings out the elegance of the Egyptian symbols of architecture and royalty. Not only does it allow you to play the game of chess but it also can function as a beautiful display and decoration piece, or be gifted to someone special.

Egyptian chess pieces will take you back into the days of the pharaohs and the land of the pyramids. With each strategic chess move you will be able to feel part of the Egyptian culture and heritage from the centuries gone by.

Why not invest in an Egyptian chess piece which pitches the Egyptian army against the Romans? It was the dream of Queen Cleopatra to be the queen who reigned over the joint Egyptian-Roman Empire. This would have been the largest area ruled by an Egyptian queen in all time.

The history of the Egyptians and Romans reveal that Egypt was actually ruled by Rome from 30 BC to 700 AD. Prior to this Julius Caesar had actually assisted Queen Cleopatra during 50 BC to wage a war against her teenage brother. However after the conquest of Egypt, Julius Caesar managed to take Cleopatra back with him to Rome.

He was assassinated in 44 BC whereupon Cleopatra returned to conquer Egypt with another Roman leader called Mark Anthony. However following a dispute between the nephew of Julius Caesar, Augustus and a Roman leader, Marc Anthony, a war ensued in which both Queen Cleopatra Anthony were murdered. In 30 BC the Romans took over Egypt completely.

You will actually relish the game of chess by utilizing these marvelous pieces and keeping the history in mind as you plan out your chess strategy one piece after the other.