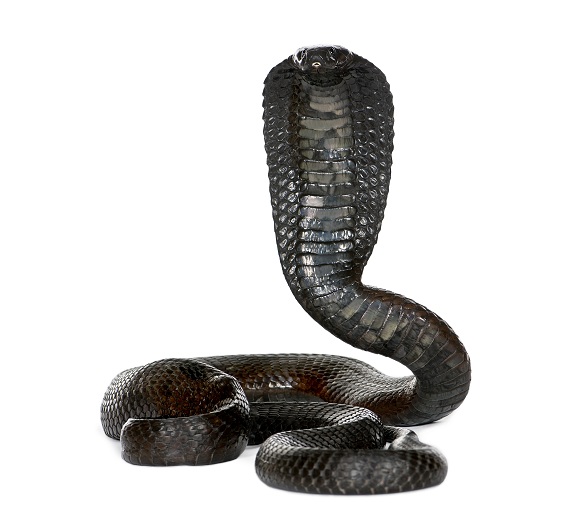 The Egyptian cobra characterized by the unique shape of its head which is topped by a hood. The average Egyptian cobra can grow up to 8 feet in length. When compared to the proportions of its body the head seems to be relatively larger and has a depressed shape along with a broad snout. It is also equipped with large sized round pupils and a neck that can measure up to 18 cm in diameter.

The cobra is found in a number of different color variations. However different shades of brown tend of be most popular. They have a trademark teardrop spot right below their eyes. The same species is also found in northwestern Africa, Morocco and Western Sahara although these tend to be completely black in color.

The ideal environment for the Egyptian cobra is a dry or slightly moist semi-desert or savanna region. In order to sustain itself the cobra needs to build its home in an area which has some amount of water and vegetation hence desert areas are definitely ruled out. Oases on the other hand tend to be the ideal habitat for the Egyptian cobra. Similarly they may be found on the agricultural grounds, grasslands and hills with sparse vegetation. Historically Egyptian cobras have been known to enter into houses. There are various things that attract Egyptian cobras to human civilization such as the chance to feast on chickens, rats and the various contents commonly found in garbage dumps. Egyptian cobra is also a great swimmer and has been observed in the waters of the Mediterranean Sea.

This particular species of cobra is known for being highly terrestrial and lives the nocturnal lifestyle in the wild. When in the captivity they tend to develop a diurnality behavior. It may also be seen basking in the sunlight in the wee hours of the morning even in the wild. The Egyptian cobra builds permanent houses and chooses locations like abandoned animal burrows, rock outcrops, termite mounds and other such places. Although it tries to make its way into human habitations in lurch of domestic fowl it is a shy reptile which will make all attempts to escape when approached by human beings. When threatened the Egyptian cobra assumes its fighting position which is an upright posture along with which it expands its hood in order to show the potential enemy that the cobra is on guard.

The Egyptian cobra is armed with deadly venom and has the ability to inject up to 200 mg of venom in a single bite. It has been classified as the third most toxic venom that is released by any species of cobras. The Philippine cobra is at the top followed by the Cape cobra with the Egyptian cobra acquiring the third spot. However in terms of the overall danger that the cobra poses to its preys as well as any human that it may come in contact with is far greater than the other two cobras. This is primarily because of the large size of the Egyptian cobra plus the fact that it can deliver a higher dose of venom in a single bite when compared to the other species.