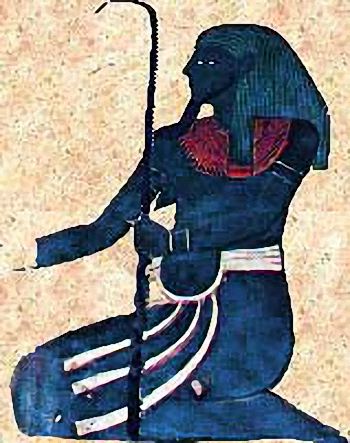 Want to learn more about Egyptian God Hapi? Read on for a historical overview of the mythological character of Hapi, one of the most important gods in ancient Egyptian history…

Ancient Egyptian culture was stooped in mythology. The Egyptians were known to be polytheists and hence had many gods that they used to worship. Amongst the different deities that the Egyptians held in high reverence was the Egyptian god Hapi.

The Egyptian god Hapi can be seen depicted through the symbolism of running water in ancient Egyptian hieroglyphics. Hapi was termed as being the father of the gods and was thus considered one of the most important deities for the Egyptians.

By looking at the physical description of Hapi in the many Egyptian artifacts and texts that have been discovered by archaeologists one would consider it to be the image of a female deity. This is because the physical depiction of the character was such that it appeared to be having the breasts of a woman although it was pretty much a man. The woman-like structure was further amplified by a rounded belly. However these physical characteristics were meant to symbolize nourishment as well as fertility.

Throughout the history of Egypt this particular deity was represented in the areas of upper and lower Nile. His attire consisted of papyrus plants that were supposed to represent Lower Egypt. When made to represent Upper Egypt he would be made to wear lotus plants. In places where Hapi has been depicted overseeing both upper and lower Egypt he can be seen wearing an attire made from both the plants.

Hapi is regarded as being one of the oldest Egyptian gods. The name of this male deity is actually a derivation of the Egyptian word used for the River Nile that is hep. According to ancient Egyptian mythology Hapi’s domain consisted of two parts, upper and lower Egypt. Upper Egypt actually refers to the northern areas of the country whereas Lower Egypt represents southern Egypt.

The Hapi god for Upper Egypt was known by the title of Hap-Reset. In Lower Egypt he was referred to as Hap-Mekht. Hapi has also been shown as having 2 wives because of the fact that he had two different domains. His wife in the Northern Territory was known as Buto and was depicted in the form of a cobra. His wife in the southern territory was called Nekhebet and has been depicted in the form of a vulture.

Hapi is regarded as being one of the greatest gods in the pantheon of ancient Egyptian gods. He was regarded as being the creator god of the Egyptians as well as the entire universe. According to the ancient legend the birth of Hapi took place on planet earth in the middle of two mountains. These mountains were namely Qer Hapi and Mu Hapi that were situated between two islands Elephantine and Philae.