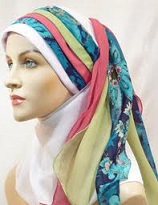 Egyptian women wear a special head covering known as the hijab. The trend of wearing the Hijab or head scarf was picked up by the Egyptians from the Muslim conquerors. This trend is still in practice today and in fact Egyptian Hijabs are very popular amongst women that cover their heads across the globe.

This is a beautiful traditional style of Egyptian Hijab that has been made in dual colors. It features an inner piece that is burly brown in color. This is topped off with an outer wrap around it which in this case is in a sandy brown tone. The combination produces a very toned down effect which is ideal for the hot summers. The outer wrap is adorned with traditional style Egyptian embroidery and bead work. You will be able to get your hands on this Egyptian hijab from above five Euros.

This is yet another facet of the kind of variety that you will be able to find in the collection of Egyptian hijabs. It consists of 2 parts known as the inner wrap and the outer wrap. The inner wrap is a plain bandanna like garment in mustard which is to be covered by the outer wrap. The brown outer wrap has been decorated with gold embedded print making this a spectacular head scarf created in a very new and unique style.

If you want to go for that typical lady’s touch then this is the ideal Egyptian hijab for you. It comprises of a pink inner piece which is topped by another pink outer piece but in a different shade. The outer wrap also features some excellent beadwork and embroidery creating a very feminine looking head covering for the women.

In recent years the concept of wearing a “hijab” has been the subject of much controversy in Egypt as well as in other parts of the world. As the country moves towards modernism many people are of the opinion that the hijab should be removed from Egyptian culture. They argue that it reflects the subjugation of women and there is particular emphasis on disallowing women to wear the hijab especially in government posts and educational institutes. A number of other countries have also followed suit such as Turkey.

However many Egyptian women argue that covering the head is a mere religious duty that their religion imposes upon them and does not reflect the subjugation of women. In fact the majority of Egyptian women that sport the Hijab attest to doing so out of their own free will and not the insistence of the male members of their families as is commonly believed.

Over the years the Egyptian Hijab has become a prominent part of Egyptian women’s lives. Some may consider it to be a religious obligation and others may find the idea repulsive but the truth of the matter is that the concept is strongly embedded in Egyptian culture and many women continue to stick to the practice.