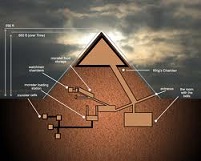 With much time spent on analyzing Egyptian pyramids, many underground passages have been discovered which connect the major pyramids. The structures at Memphis are actually the pyramids of Giza because this was the original name for Giza as mentioned in the map of Nordan in the year 1757.

The Sphinx Guards the Underground Rooms

In 300 BC, Crantor suggested that there were underground pillars based under Egypt and had pre-historical records carved in stone. Their main function was to flank the access route interlinking the pyramids. There is also a record of an entrance running under the Sphinx and connecting it to the Great Pyramid.

This was a closed bronze gate and only the few Magi knew how to unlatch the secret spring which opened it. It was always blocked by sand but is now visible between the forelegs of the Sphinx. An interesting point is that it is not guarded by an army but due to great public reverence no one ever trespassed through it out of fear and did not want to violate its sanctity.

The tummy of the Sphinx was carved into alleys which created a route to the underground area of the Great Pyramid. This underground maze was created very craftily and it was very easy to navigate without a map and end up at the starting point.

It seems that the main purpose of the lion head Sphinx at Giza according to its position is to actually guard and obscure the access way which leads to the lower terrains of the great Pyramid. The ancient Arabs also believed that there were great many treasures and mystical objects hidden under the Sphinx.

One of the later records by the Arab researcher Altelemsani is still maintained in the British Museum and speaks of the elongated and square shaped underground passageways between the great River Nile and the great Pyramid with the unique structure blocking the entrance from the Nile.

The Hidden City in a Natural Cave

A uniquely planned city was discovered by archaeologists who included amazing structures like temples, peasant dwellings, and stables as well as a palace and had underground water sources and drainage systems. There is a huge natural cave system which runs below the plateau of Giza and moves out towards the east under Cairo.

Again its entrance is from inside the Sphinx and the stairs have been carved into the rock leading all the way to the cavern which runs under the bedrock of the River Nile.  Inflatable rafts and generators were required to navigate the underground hydraulic waterway which is a 1 km wide lake.

The city is built on the banks of this lake and huge crystal balls provide prominent lighting to this area. The second entrance are stone steps carved into the basement towards the city of Babylon which was old Cairo and may possibly be the city mentioned in the books of Genesis called Gigal. The release of the video of this hidden city was banned and only a few private viewings were conducted. The reason for this secrecy is unknown to date.

The beautiful crystalline balls which illuminate the cavern and are the size of a baseball seem supernatural. They have embedded hieroglyphs which can be accessed by a mental request made by the bearer of the ball and the hieroglyphics turn like the shifting pages of a book. In 1925 the sand was cleared from the entrance of the Sphinx to reveal reception halls, small temples and hidden doors along with other enclosures.